Big verdict for WiLAN against Apple $85.23 million in damages – the full amount that the company requested. McKool Smith represented the patentee here. Apple will likely appeal on several grounds. 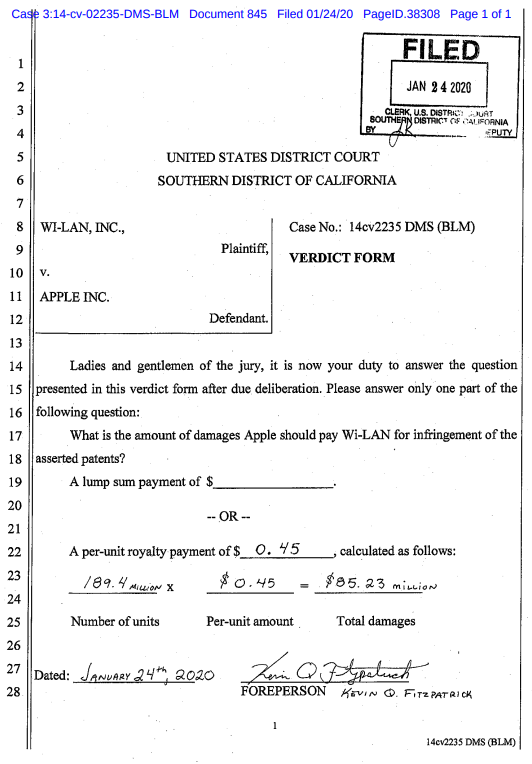 This is the second time around on damages.  The first jury awarded $145,100,000.  However Judge Sabraw gave WiLAN the option of either (1) remitting the damages down to $10 million or (2) holding a new trial on damages.  According to the court the problem stemmed from expert opinions regarding apportionment that were not supported by the evidence.  Even though it was a single-issue jury trial, the judge still provided the jury with 31 pages of jury instructions: Jury Instructions.  Here are a few of the key instructions:

In this case, Wi-LAN seeks a reasonable royalty. A reasonable royalty is defined as the money amount Wi-LAN and Apple would have agreed upon as a fee for use of the invention at the time prior to when infringement began. You must be careful to ensure that award is no more or no less than the value of the patented invention.

The amount you find as damages must be based on the value attributable to the patented technology, as distinct from other, unpatented features of the accused product, or other factors such as marketing or advertising, or Apple’s size or market position. In determining the appropriate royalty base and the appropriate royalty rate, the ultimate combination of both the royalty rate and the royalty base must reflect the value attributable to the patented technology. In other words, the royalty base must be closely tied to the invention. It is not sufficient to use a royalty base that is too high and then adjust the damages downward by applying a lower royalty rate.

The two patents at issue in the case are WiLAN’s 8,457,145 and 8,537,757. The patents cover a mechanism for grouping data within queues ranked by required quality-of-service needed with timers associated with each queue. Claim 9 of the ‘145 was infringed (among other claims)

a plurality of queues, each queue for grouping data based on the QoS; and

a media access (MAC) module configured to set an initial value for a timer associated with a queue, and periodically, on expiration of the value of the timer, transmit a bandwidth request indicating an amount of bandwidth required for transmitting the data from the queue.