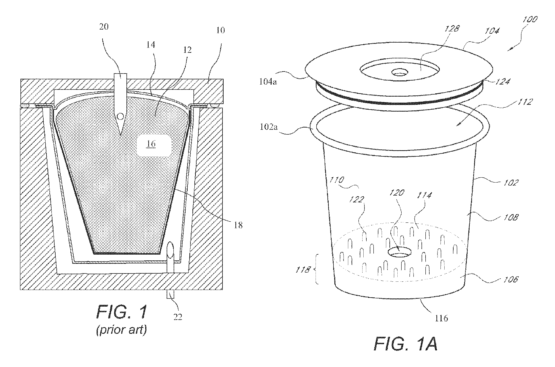 ARM’s US Patent 8,720,320 covers a Keurig coffee-machine adapter.  Typical cartridges are single-use — rendered ineffective after being pierced by the brewer during operation. ARM’s device isn’t pierced and so retains its effectiveness over multiple uses.

ARM filed an ITC complaint against Eko and others. Although the ITC ruled that several claims were invalid for lacking written description (e.g., claim 5), Eko defaulted with respect to claims 8 and 19 and the ITC issued an exclusion order with respect to those claims.

Subsequently, Eko filed a district court declaratory judgment action to collaterally attack the ITC ruling as to claims 8 and 19. The district court complied and found the claims not-infringed (summary judgment) and invalid as obvious (jury verdict).  The district court also awarded attorney fees to Eko as the prevailing party in what it found to be an exceptional case.

a container, disposed within the brewing chamber and adapted to hold brewing material while brewed by a beverage brewer, the container comprising:

an inlet port, adapted to provide the input fluid to the container; and

a needle-like structure, disposed below the base;

wherein the predetermined distance is selected such that a tip of the needle-like structure does not penetrate the exterior surface of the base.

8. The beverage brewer of claim 5, wherein the container is reusable.

Note here that claim 8 adds a quite minor limitation that is probably already implied within the scope of claim 5.

On appeal, the Federal Circuit has affirming the claim construction and thus the resulting non-infringement and obviousness decisions.  In the process, the appellate panel reiterated the lower court’s statement that “ARM’s insistence on trying [the case] was largely a charade used for the purpose of extending the life of the earlier ITC . . . order.”

Normal preclusion rules do not apply to interactions between the ITC and District Court. See, Tandon Corp. v. U.S. Int’l Trade Comm’n, 831 F.2d 1017, 1018 (Fed. Cir. 1987) (even appellate treatment of an ITC decision “does not estop fresh consideration by other tribunals”); S.Rep. No. 1298, 93d Cong., 2d Sess. 196 (“it seems clear that any disposition of a Commission action by a Federal Court should not have a res judicata or collateral estoppel effect in [infringement] cases before such [district] courts.”).

An invalidity decision in district court does not automatically cancel an ITC exclusion order. Rather, the ITC can rescind its decision based upon evidence that “the conditions which led to such exclusion from entry or order no longer exist.” Section 337(k)(1).  Following the district court decision, the ITC issued a temporary rescission order that will likely be made permanent now — allowing Eko to keep importing.

The district court erred in its construction of “passageway” by rewriting the claims, including adding a negative limitation that is unsupported by the specification. . . .

The district court construed the term “passageway” as “a narrow space of some depth or length connecting one place to another.” This construction is not supported by the specification. The district court also interpreted “passageway” to exclude a receptacle “that utilized a broad, thin mesh.” This exclusion was raised sua sponte by the court and not argued by either party.

The majority suggested that the district court might have erred a bit in its construction but that Eko didn’t infringe either way.

In a turn of events, Eko also sued ARM for infringement and the jury sided with Eko. U.S. Patent No. 8,707,855.  Although Eko won on infringement, the jury found no willful infringement. On appeal, Eko asked for a retrial of willfulness based upon improper jury instructions.

On appeal, the Federal Circuit found some fault with the jury instructions here — concluding that the instructions improperly intermix enhanced damages issues that are left for the judge. Rather, the jury’s role here is to address willfulness.

[T]he inclusion of the phrases “especially worthy of punishment” and “reserved for egregious behavior” in Jury Instruction 40 was erroneous.

One thought on “Parallel District Court and ITC Litigation”