In a recent post, I noted the “trap” for patent prosecutors who use the transitional phrase “consisting essentially of.” That phrase has been traditionally interpreted to indicate that an infringing apparatus (or method) would include all of those elements and may also include other elements that “do not materially affect the basic and novel properties of the invention.” The more popular and broader “comprising” transition captures as infringement an apparatus that practices all of the claim elements, regardless of what additional elements are also being practiced by the accused. The courts have also locked-down the meaning of the narrower “closed” transition “consisting of” to only find infringement when the accused apparatus practices the claim limitations and nothing more.

Following my alarmist post, Paul Morgan provided me with “calm down” commentary — writing that he “would suspect” the use of consisting essentially of “is quite small, essentially limited to some chemical composition claims.”

To follow-up with some data, I downloaded all of the utility patents issued so far in in 2020 and parsed through all of the claims.  Paul Morgan was correct — the beast is quite rare. Of the 50,000 utility patents issued thus-far in 2020, only 0.5% include the phrase within their claim sets. (Note – I searched for “consisting essentially of” or “consists essentially of”).   A prime example comes from U.S. Patent 10,525,007:

Note that some portion of the consisting essentially of limitations are not found in the transitional phrase following the claim introductions but rather in a transition leading to a sub-limitation or modified Markush group. An example of this structure is found in U.S. Patent 10,573,826.

Comprising is obviously much more common — 98% of patents in my cohort include “comprising.” 12% of patents recite the phrase “consisting of” however, the vast majority of those are signaling a Markush group rather than an initial transition. (Note – again here, I looked for both the “ing” and “s” form of the terms). These results are shown in the chart below. 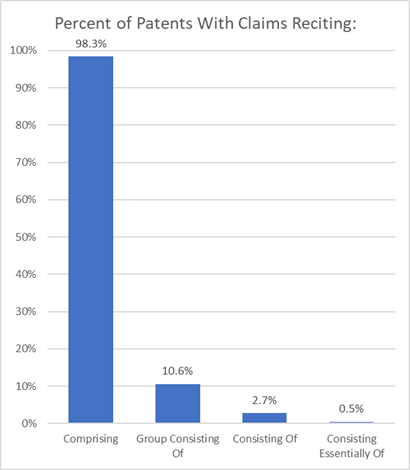 Close to 1% of claims do not use one of these three traditional transitions. Of those, it appears that the majority use some other word such as “having,” “containing,” or “including.” A small minority of patents are written without any transitional phrase at all. These typically jump from the introduction directly into wherein clauses. There are also a substantial number of chemical compound claims drafted in the following form: “A compound selected from the group consisting of: …”

84 thoughts on “The Rare Beast: Consisting Essentially Of”