In a couple of 2019 decisions, the Federal Circuit appeared to expand-out the “merely tangential” exception to prosecution history estoppel. Those cases have now both been petitioned to the Supreme Court for review — with the two cases becoming three petitions:

Whether a patentee may recapture subject matter via the doctrine of equivalents under the “tangential relation” exception by arguing that it surrendered more than it needed to during prosecution to avoid a prior art rejection, even if a claim could reasonably have been drafted that would literally have encompassed the alleged equivalent.

[W]hether, under Festo’s “tangential” exception to prosecution history estoppel, patent owners may recapture subject matter they could have claimed in prosecution but did not, by arguing that they surrendered more than they needed to during prosecution to address a rejection by the Patent Office.

The doctrine of equivalents [DoE] is fairly complicated by itself because of the element-by-element function-way-result test and the limit on vitiation of claim elements.  DOE is further complicated by the prosecution history estoppel [PHE] that creates a presumption against equivalents associated with narrowing claim amendments made during prosecution for a “substantial reason related to patentability.”  In Festo, the Supreme Court explained that courts should presume estoppel based upon a narrowing amendment. However, the patentee may avoid the estoppel by providing evidence that the “rationale underlying the [narrowing] amendment … bear[s] no more than a tangential relation to the equivalent in
question.” Festo Corp. v. Shoketsu Kinzoku Kogyo Kabushiki Co., 535 U.S. 722, 740 (2002) (TAN).  In prior posts, I called this expansion [DoE]; retraction [PHE]; re-expansion [TAN] process DoePHETAN.  The complication comes from the courts who – as I previously explained “wanted to empower patentees with the doctrine of equivalents but then became afraid that they had gone too far” and perhaps given too much power to a jury.

The petitions here are powerful and their parallelism may create interest from the court. Unfortunately, neither call for simplifying this process but rather ask for more detailing — What is the meaning of “tangential?”; At point must the “rationale” be declared?; What is the scope of “recapture” available for DoE? 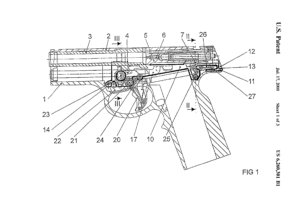 2 thoughts on “Equivalents at the Supreme Court”