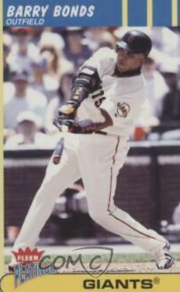 A newly canonical case in property law texts is Popov v. Hayashi, 2002 WL 31833731 (Cal. Super. Dec. 18, 2002).  The case involves a Barry Bonds record-setting home run baseball.  Alex Popov almost caught the ball, but as it entered his glove he was immediately engulfed by the crowd of fans who were deemed an “out of control mob, engaged in violent, illegal behavior.”  The ball came-out and Patrick Hayeshi (who was also knocked to the ground) picked up the ball and took possession. There was no credible evidence that Hayeshi took part in any of the violent or illegal behavior. Because of the oddity of fandom, the $6 ball was boosted to an expected value $1.5 million based upon its record-setting experience. (It was eventually sold at auction for ~$500k because of Bonds’ drop from fame).

In its decision, the California judge partially ruled for Popov — holding that he had a “pre-possessory interest” in the baseball once it went in his glove, and that interest was unlawfully interrupted by the Crowd.

As a matter of fundamental fairness, Mr. Popov should have had the opportunity to try to complete his catch unimpeded by unlawful activity. To hold otherwise would be to allow the result in this case to be dictated by violence. That will not happen.

Although Popov had some interest in the ball, Hayeshi was the one who took actual possession (gaining complete control of the ball and stopping momentum), and did so using within the bounds of both law and baseball custom.

In the end, the judge was unable to figure out which of the two should win:

Neither can present a superior argument as against the other.

Mr. Hayashi’s claim is compromised by Mr. Popov’s pre-possessory interest. Mr. Popov cannot demonstrate full control. … Their legal claims are of equal quality and they are equally entitled to the ball.

The court therefore declares that both plaintiff and defendant have an equal and undivided interest in the ball.

Id. In the end, the two co-owners sold the ball. The case would have come out differently if Hayashi was seen as a wrongdoer (Popov would get full ownership) or if Popov had dropped the ball without being wrongfully jostled (Hayashi would get full ownership).  The halfsies outcome is somewhat unusual in property law but was made easier because both parties announced they wanted to sell the ball — it was much easier to split the money rather than share possession of the ball itself.

In patent law, conception used-to establish a pre-possessory interest in the future patent.  Conception created an inchoate (incomplete) right that could be secured by diligently reducing the invention to practice (either actually or constructively by filing the patent application).  This approach has changed substantially post-AIA where the focus is on completing the invention process by filing for patent rights with severe limitations on any pre-filing rights or interests.  Prof Oliar and Stern explained;

The first-to-invent rule was abandoned following enactment of the Leahy-Smith America Invents Act (“AIA”) in 2011, the most comprehensive overhaul of U.S. patent law in at least half a century. Its most prominent change was to replace the first-to-invent rule with a first-to-file system, or more precisely, a system that awards patents to the first person to disclose their invention to the public, whether by filing a patent application or through other public acts. The AIA thus pushes back the temporal lynchpin from the beginning of the inventive process to its end.

Dotan Oliar, James Y. Stern, Right on Time: First Possession in Property and Intellectual Property, 99 B.U. L. Rev. 395, 422 (2019) (DDC: Note that the FTF change hasn’t been the most prominent change as suggested by the authors).

Patent law presents an element beyond the Oliar article and the Popov v. Hayashi decision. The patent system is not not generally focused on a winner-take-all approach. We’re not talking about the single Barry Bonds ball (or even a half-dozen). Rather, there are hundreds of thousands of potential valuable inventions awaiting discovery.  The plethora of potential inventions naturally offers the partial reward granted in Popov v. Hayashi.  No single person or entity will be able to claim all (or even a substantial percentage) of the inventions.  But, to claim any rights, the inventor must actually capture the “wily quadruped” despite knowledge of other hunters.  Pierson v. Post, 3 Cai. 175, 175 (N.Y. Sup. Ct. 1805) (“Pierson, well knowing the fox was so hunted and pursued, did, in the sight of Post, to prevent his catching the same, kill and carry it off.”).

In thinking through Popov v. Hayashi, I would pause to distinguish between the Popov’s pre-possessory interest in the ball and the pre-filing inchoate rights of an inventor.  While the second has been long considered a property right — the former is more like a personal interest that should not be wrongfully injured.  The closest actions would be unfair competition or wrongful interference with contractual relationships. Those actions are powerful, but are generally seen as outside of the property law context and instead in the midst of torts. The Supreme Court, on the other hand, has explained the power of an inchoate right to a patent:

The discoverer of a new and useful improvement is vested by law with an inchoate right to its exclusive use, which he may perfect and make absolute by proceeding in the manner which the law requires.