Leaving aside the circularity of that statement—if it’s distinct it can be distinctive?—this holding lowers the bar for the acquisition of exclusive rights over colors. For the first time, color marks are instantly protectable (when used in commerce as a mark) and need not wait until they achieve secondary meaning, so long as they are used on packaging.

Because this ruling comes from the Federal Circuit it controls the how the Trademark Office deals with applications for color marks. Companies that want to acquire exclusive rights in colors now have a blueprint for how get a registration quickly: apply for a product packaging mark. So companies like Christian Louboutin should make those shoeboxes red!

The opinion was authored by Judge O’Malley joined by Dyk and Chen. The court reversed the TTAB, which had affirmed the trademark examining attorney’s refusal to register Forney’s mark.

In its use-based application (Serial No. 86269096), Forney identified its mark as a “color mark.” The mark, represented below, was applied for accessories and tools for welding and machining and described as follows: “[t]he mark consists of a solid black stripe at the top. Below the solid black stripe is the color yellow which fades into the color red. These colors are located on the packaging and or labels.” 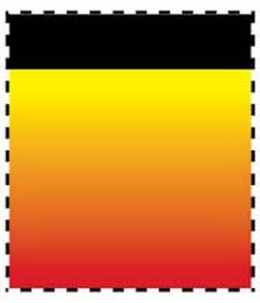 Because Forney sought to register the mark without showing secondary meaning, the Examining Attorney refused registration on the principle register. Affirming, the TTAB, in a precedential opinion by Kuczma, held that “a color mark consisting of multiple colors applied to product packaging is not capable of being inherently distinctive.” It stated that Supreme Court precedent does not distinguish between color marks for products and color marks for product packaging; both require secondary meaning to be registrable.

Not a Gray Area

The Federal Circuit’s opinion reads like it thought it had carte blanche to write the rules in this area. It stated that “[t]he Supreme Court has [] provided several data points on inherent distinctiveness of trade dress.” (emphasis added) I’ve certainly never thought of the Supreme Court’s trilogy of cases on trade dress as data points; I always thought they were precedent. It later referred to these cases as “guideposts.”

Surprisingly, the Federal Circuit stated that “[a]lthough Qualitex implied that a showing of acquired distinctiveness may be required before a trade dress mark based on color alone can be protectable, it did not expressly so hold.” (emphasis added) This is just flatly wrong. The Qualitex Co. v. Jacobson Products Co. court did not “imply” the rule at all; it set it out in black and white:

over time, customers may come to treat a particular color on a product or its packaging … as signifying a brand. And, if so, that color would have come to identify and distinguish the goods–i.e. to “indicate” their “source”–much in the way that descriptive words on a product … can come to indicate a product’s origin.

In its subsequent decision in Wal-Mart Stores, Inc. v. Samara Brothers, Inc., the Court reconfirmed its rule: “with respect to at least one category of mark— colors—we have held that no mark can ever be inherently distinctive.” It also stated: “In Qualitex, . . . [w]e held that a color could be protected as a trademark, but only upon a showing of secondary meaning.” Nope, no innuendo.

Coloring Outside the Lines

The Federal Circuit’s decision here creates a new rule for color marks in product packaging. Although it states that it is “not the only court to conclude that color marks on product packaging can be inherently distinctive,” even the case it cites doesn’t support its new rule. It cites a 10th Circuit decision (Forney Industries v. Daco of Missouri), but that court explicitly stated “we hold that the use of color in product packaging can be inherently distinctive … only if specific colors are used in combination with a well-defined shape, pattern, or other distinctive design.” (emphasis added). The Federal Circuit stated that the 10th Circuit was “considering a mark very similar to the one at issue here,” but that statement may have involved a bit of whitewashing because the 10th Circuit case involved the very same mark owner and the same mark! The only difference was that the mark was described with more definition in the 10th Circuit case, and the court still denied protection.

To the extent this decision is read to hold that color marks on product packaging can be inherently distinctive; it is at odds with both Qualitex and Wal-Mart. Does that make it ripe for reversal by the Supreme Court? While decisions by the Federal Circuit often make the Supreme Court see red, the Court only grants cert. in trademark cases once in a blue moon. The government, however, has a strong record of having its cert. petitions granted. Recall that most doubted cert. would be granted in Brunetti. Another question is whether the government will even petition for cert. or instead decide not to go chasing rainbows.

Even were the holding so limited, it still begins to undermine the policy orientation of Wal-Mart. It’s hard not to understand Wal-Mart as a course correction. Two Pesos’s holding that trade dress can be inherently distinctive did not foresee any of the problems it created. Although Qualitex further extended trade dress to include color, it did claw back a requirement of secondary meaning. The Wal-Mart Court finally saw the policy mess created by Two Pesos. It meant to build on Qualitex’s limitation, not scale it back. Qualitex saved colors from being inherently distinctive, and Wal-Mart saved product design. The Federal Circuit’s decisions pushes in the opposite direction, by narrowing Qualitex’s carve-out.

Unfortunately, the Federal Circuit is not clear that that its new rule is limited to multi-color marks. It simply states: “we hold that color marks can be inherently distinctive when used on product packaging, depending upon the character of the color design;” and “a distinct color-based product packaging mark can indicate the source of the goods to a consumer, and, therefore, can be inherently distinctive.” Requiring a color mark to be “distinct” is not filling any gaps left open by Qualitex, which specifically sated that the green-gold color was distinct for dry cleaning press pads. If the court had in mind a particular kind of color mark, it missed a golden opportunity to say so.

The rationale for both Qualitex and Wal-Mart was that, unlike product packaging, neither color nor product design prompt consumers to “equate the feature with the source.” Is there reason to believe that either multiple colors function more like product packaging than a single color, or that color on a product conveys something different than color on a package? If so, what do we make of the fact that Forney has been using its multi-color mark on packaging for more almost 30 years and yet chose to litigate in two different courts of appeal rather than simply demonstrating its secondary meaning?

10 thoughts on “Guest Post: Out of the Blue: The Federal Circuit Devises a New Rule for Color Marks”