The Federal Circuit has an internal practice of only issuing R.36 affirmances-without-opinion in cases where the court holds oral arguments.  Most of the oral arguments have been cancelled for the court’s April sitting. The result then is that either (1) the court is going to write a lot more opinions or (2) the court will shift its practice to now start issuing no-opinion judgments even without oral arguments.

Todays short decision in In re Thomas (Fed. Cir. 2020) (per curiam) suggests to me that the court will be writing the opinions. Douglass Thomas is a patent attorney and his claimed invention is a “computer-implemented method for notifying users having patents of subsequent publications that reference the patents.”  The examiner rejected the claimed invention as ineligible and that decision was upheld by the PTAB (along with finding the claims anticipate/obvious).

The Federal Circuit has now affirmed the rejections — offering the following 1-paragraph analysis:

Applying the two-step framework set forth in Alice Corp. v. CLS Bank Int’l, 573 U.S. 208 (2014), the Board found that the claims are directed to the abstract idea of “alerting by notification message notice of a new publication indicated as relevant to the notifiee.” The Board also found that the claims do not contain an inventive concept beyond the abstract idea. We agree with the Board on both points. We therefore adopt the Board’s reasoning in its decision and its decision denying rehearing.

Despite being short and lacking depth of analysis. The decision is helpful in a number of ways — most importantly has to do with the potential alternate reasons for affirmance. If the case had been simply affirmed without opinion then we would not know if the court affirmed eligibility or instead on obviousness/anticipation. That would allow Thomas to avoid issue preclusion and potentially raise the same arguments again in this or a different case.  The court’s 1-paragraph will foreclose that avenue. 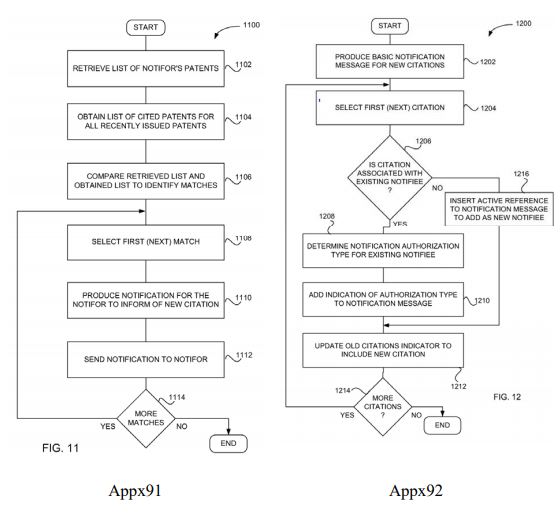 21 thoughts on “More opinions coming; and Patenting the Patenting Process”