The appellate court here invalidates three Dropbox patents as ineligible (abstract ideas) and also confirms that the lawsuit was properly disposed on the pleadings. U.S. Patent Numbers 6,178,505, 6,058,399, and 7,567,541. 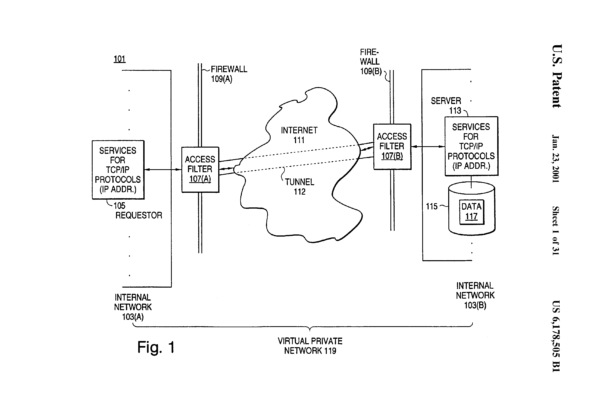 Looking at the ‘505 patent.  Claim 8 requires the following:

The claims do not spell-out how this checking or comparison will take place, and the Federal Circuit notes that the specification also fails to delve into any “technological solution.” “Instead, the specification largely treats the ‘access filter’ as a black box.”  To be patent eligible:

The patent has to describe how to solve the problem in a manner that encompasses something more than the principle in the abstract. . . . And, that solution has to be evident from the claims.

Specificity Required for an Inventive Concept: Regarding Alice Step 2, the patentee argued that its approach provided a more “economically secure way to transmit data.”  On appeal, the Federal Circuit found that advance – even if true – to be insufficient.  Rather, a claim includes an “inventive concept” at Step 2 when it “recites a specific, discrete implementation of the abstract idea where the particular arrangement of elements is a technical improvement over the prior art.” Slip Op. (Quoting BASCOM).

On the Pleadings. In its (amended) complaint, Dropbox included five paragraphs alleging how the asserted patents provide an advancement over the prior art.  The problem, as noted in the prior paragraph, was that the allegations were not sufficiently specific.

The district court opined that some of these allegations found in the complaint should be disregarded as “attorney arguments . . . attempting to manufacture a factual question” insufficient to defeat a motion to dismiss. That holding is by the district court is questionable regarding complaints. On appeal, the Federal Circuit did not address the issue directly but instead held that the allegations were insufficient because the alleged innovative advance was not specifically tied to the claims themselves.

38 thoughts on “Claim Specificity Required for an Inventive Concept”