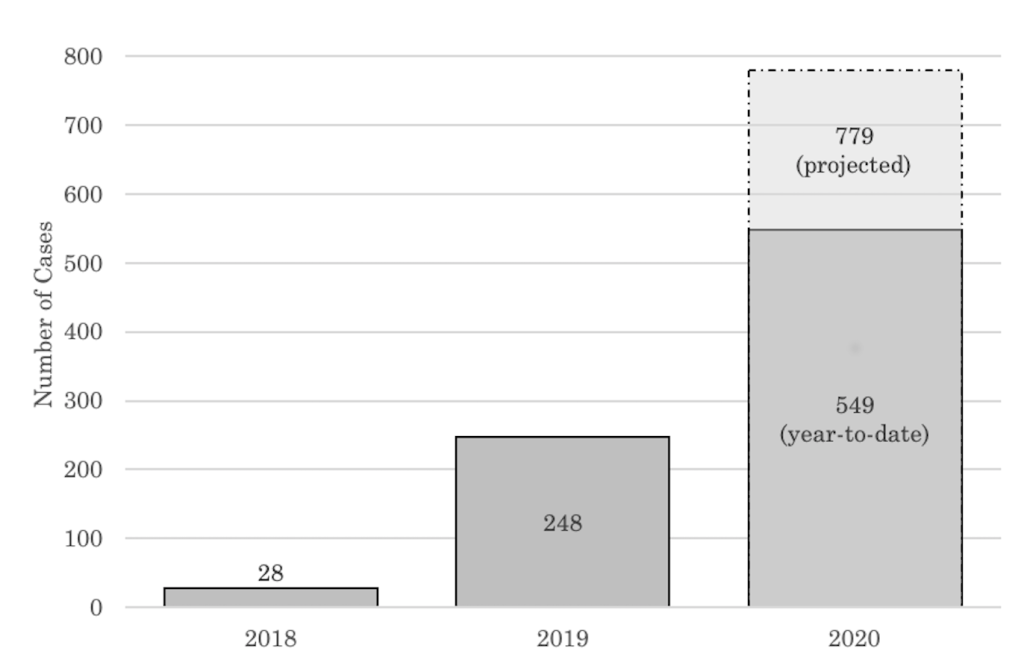 The explosion of patent cases in Waco—the vast majority of which are filed by non-practicing entities—is fueled by Judge Albright’s concerted efforts to attract patent plaintiffs. He has been explicitly advertising his district—through presentations to patent lawyers, comments to the media, procedures in his courtroom, and decisions in patent cases—as the place to file your patent infringement lawsuit.

In a draft article, now available on SSRN, we identify five reasons why the Western District is attractive to patentees and explain why they are problematic:

1. The Western District’s case assignment practice enables plaintiffs to predict—with absolute certainty—that Judge Albright, not any of the 16 other judges sitting in the district, will hear their case. All they have to do is select “Waco” from the drop-down menu on the court’s electronic filing system and the case is automatically assigned to Judge Albright.

3. Venue transfer decisions: Judge Albright rarely transfers cases out of the Western District of Texas (only 3 of 14 inter-district transfer motions have succeeded to date), a practice also used by judges in the Eastern District of Texas during its heyday as the go-to district for patent litigation. More remarkably, Judge Albright regularly transfers cases filed in the Western District’s Waco Division to its Austin Division while retaining the case on his own docket (50 cases and counting so far).

It’s worth pausing to emphasize what this means: patentees are filing in Waco to guarantee Judge Albright is assigned to the case. But they do not actually have to litigate in Waco to keep the case in front of Judge Albright. Rather, they can ask him to transfer the case to the more desirable locale of Austin and he will do it as a matter of course—even though, if the case had been filed in Austin originally, there is zero chance Judge Albright would have been assigned to it.

4. Judge Albright seems reluctant to stay litigation pending related disputes in other forums, such as the PTAB, not just because of the aggressive schedule he sets but also because of a normative belief that patentees have a constitutional right to have a jury decide patent validity.

5. Judge Albright has never invalidated a patent on eligibility grounds (10 motions, 10 denials), even though many of the patents being asserted are the “do it on a computer” patents at which the Supreme Court’s Alice decision was most directly targeted.

Though many reforms could help solve these problems, we focus on two.

First, there’s surprisingly no law that requires cases to be randomly assigned among judges of a particular district. Mandating random assignment would curb the judge shopping that incentivizes judges to distort procedures and the law for the specific purpose of attracting litigation.

Second, venue in patent cases should be tied to geographic divisions within a judicial district, not just the district as a whole. As applied to the Western District of Texas, that reform would thwart the tactic of using a defendant’s activities in Austin to establish venue in Waco for the sole purpose of shopping for the Waco division’s only judge.

114 thoughts on “Guest Post: How the West Became the East: The Patent Litigation Explosion in the Western District of Texas”