Last week we released version 1.16 of the Compendium of Federal Circuit Decisions, which is a publicly-available dataset containing information about all documents published by the Federal Circuit on its website since 2004 (which includes all opinions and, since 2007, all Rule 36 summary affirmances).  The Compendium was designed from the ground-up to be used for empirical research rather than as a conventional legal research tool. 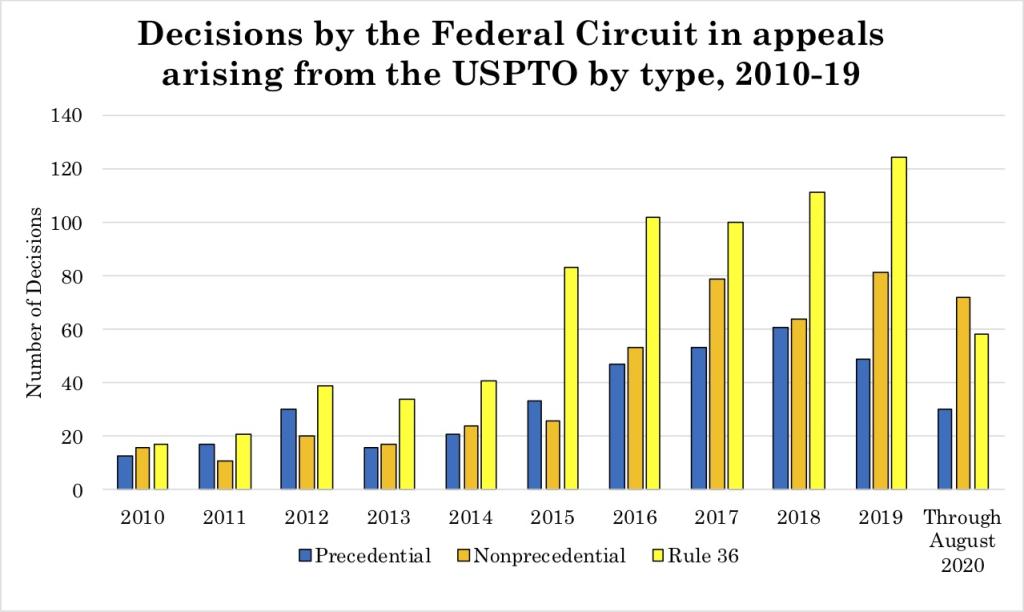 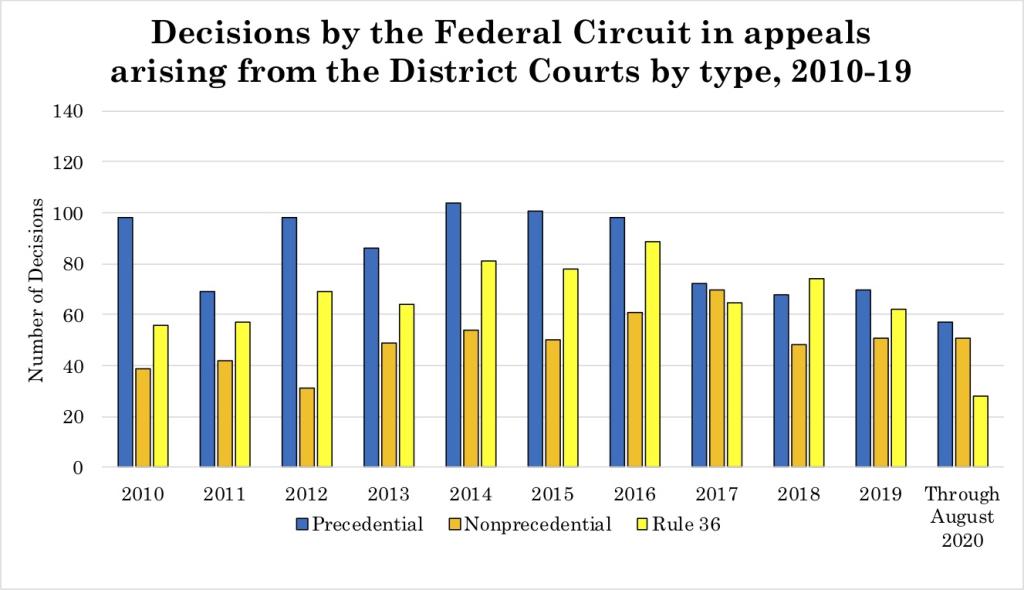 One noteworthy shift is the relative drop in Rule 36’s.  So far in 2020, the court has decided more appeals via the mechanism of nonprecedential opinion and fewer through summary affirmance–especially in appeals arising from the PTO.

Affirmance rates continue to be in line with the past: the vast majority of decisions result in the affirmance of the lower tribunal.*  Over the last few years, the court has consistently affirmed the PTO outright about 80% of the time, and affirmed-in-part another 7% of the time.  The district courts have been affirmed a bit less often: about 70% of the time the court is affirmed entirely, and another 13% of the time it has been affirmed-in-part.  The court’s decisions in 2020 have been consistent with these metrics. 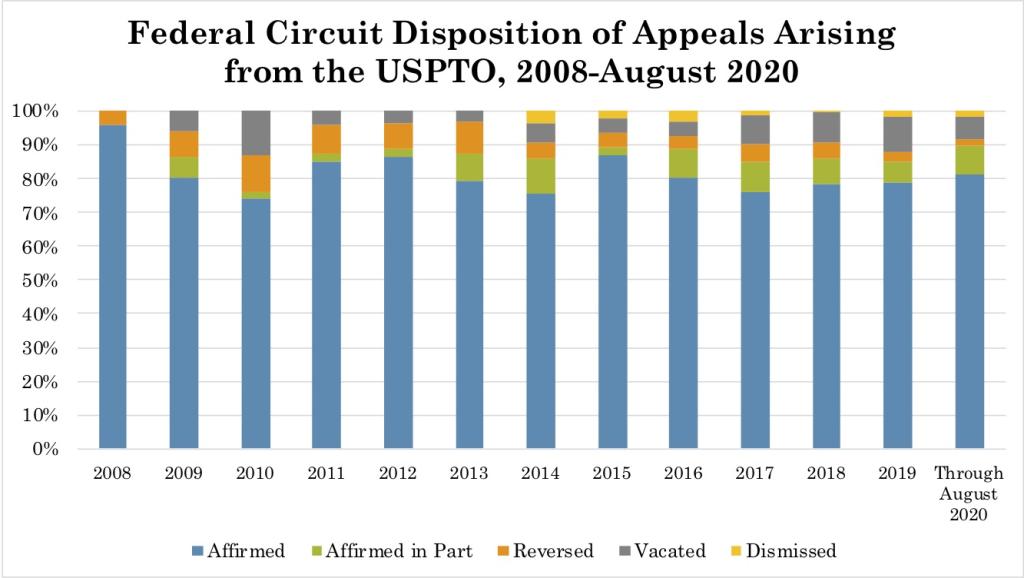 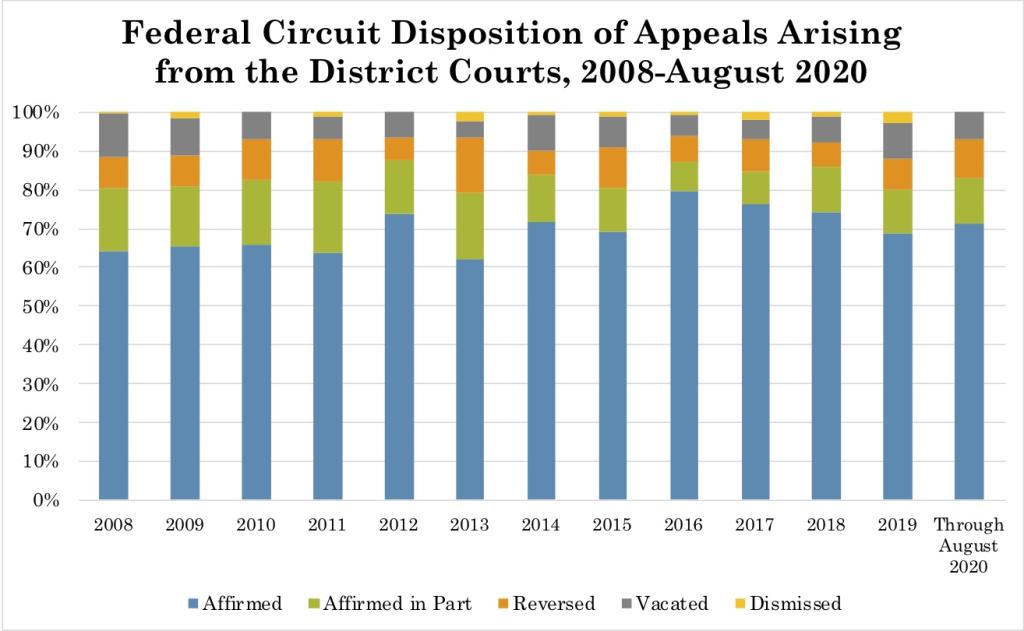 Who’s written the most majority opinions in patent case so far this year?  For appeals arising from the PTAB, it’s been Chief Judge Prost at 14, followed by “Per Curiam” at 12.  This isn’t a new development: panels have been issuing opinions Per Curiam at a rate of about 8-16 per year for the past five years.  For appeals arising from the district courts, Judge Lourie has written the most at 16 opinions so far this year; Judge Moore has written the second-most at 11 (also joined by the panel writing Per Curiam.)

You’re welcome to play around with the data on your own here: https://empirical.law.uiowa.edu/compendium-federal-circuit-decisions.  Keep in mind that with any empirical data project, it’s important to be mindful of what the data means, as well as its limitations (many of which I discuss here and here).

*For those wondering how this data relates to the statistics on the Federal Circuit’s webpage, the Federal Circuit reports reversal rates based on Financial Year (10/1 – 9/30) rather than Calendar Year, only considers complete reversals as reversals (i.e.: an affirmance-in-part is not a reversal), and calculates its reversal rate as a function of appeal docket numbers rather than decisions (for example, a single decision can, in rare instances, involve 10 or more appeal docket numbers).  See id. at 260, 263, 278.