I wrote earlier about the Federal Circuit’s TracFone decision, calling-out W.D. Texas Judge Albright for his months long delay in deciding defendant’s motions to transfer/dismiss for improper/inconvenient venue. In its decision, the appellate court repeated a prior conclusion that Judge Albright’s approach represented “egregious delay and blatant disregard for precedent.”

The following day (March 11), Judge Albright complied with the order and issued a 17 page opinion denying TracFone’s motion to dismiss or transfer.

Proper Venue: Congress created a particular venue statute for patent infringement lawsuits (28 USC 1400(b)) that is substantially narrower than the general venue statute used in Federal Courts. (28 USC 1391).  For an out-of-state-defendant (such as TracFone), venue in W.D. Texas will be proper if the defendant “has a regular and established place of business” within the district and has also “committed acts of infringement” within the district.

Regularly established place of business: In this case, the plaintiff Precis alleged that TracFone operates a store in San Antonio using its d/b/a name Total Wireless.  The address is 1825 SW Military Dr., San Antonio, TX 78221.  The photo below comes from a Google search and is dated May 2019. Google tells me that the store is now closed, but we don’t know the date when it closed.  [COULD someone drive by and snap a photo for me?]. 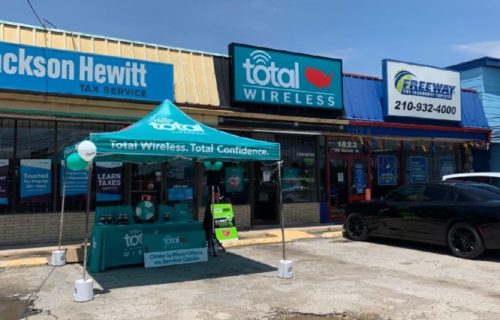 In its briefing, TracFone (1) denied that this was its store — but rather was “an independently owned retailer of TracFone products” and (2) alleged that the store was already out of business “well before this action was filed” in April 2020.  To support its motion to dismiss, TracFone submitted an affidavit from a TracFone employee who stated that the referenced store above is a Click Mobile store and that “TracFone has no ownership or other interest in Click Mobile and no relationship with it other than its rights to sell TracFone products and services.”  In a later filing, the defendant did admit that the “store exclusively sold Total Wireless products and accordingly used that mark.”  From the pictures and the admission of exclusive dealing, it sure looks like the relationship must have gone a bit deeper than simply “rights to sell TracFone products.”

In its responsive briefing, Precis provided images from TracFone’s TotalWireless website showing that this was an exclusive Total Wireless store. Those have since been removed from the website.

Note here that Precis did not provide its own affidavits.  And, the normal rule of a venue motion to dismiss/transfer is that uncontroverted plausible allegations in plaintiff’s complaint must be taken as true. However, the court should take into account evidence presented by the defense (including affidavits).  Still, any conflicts between affidavits should be resolved in the plaintiff’s favor.

In my mind, there are two big issues (1) is the store attributable to TracFone? and (2) what about the timing issue — what result if it closed before the complaint was filed?

In his order, Judge Albright sided with the patentee — holding that allegations and evidence suggests enough link to conclude that the store a TracFone “place of business.” The court writes:

[Precis_Group_LLC_v._Tracfone__53].  Judge Albright did not address the TracFone affidavit indicating only a distant relationship with the actual store owner. Although I believe that it could be distinguished based the seeming exclusive dealing and trademark linkage, the court should have walked through the process.

The court also denied the motion to transfer for on grounds of inconvenient forum (or that there is another more convenient forum) under 28 USC 1404.

The Court finds that the ease of access to relevant sources of proof and the court congestion factors weigh slightly in favor of transfer, the cost of attendance of willing witnesses weighs against transfer, and all other factors are neutral. The Court notes that the convenience of witnesses is the single most important factor in the transfer analysis and that the court congestion factor is the most speculative and cannot outweigh the other factors. As such, the Court finds that TracFone has not met its significant burden to demonstrate that the Southern District of Florida is “clearly more convenient.”

25 thoughts on “Timing the Venue Inquiry in W.D. Texas”