The next big software copyright case is before the Federal Circuit in the form of SAS Institute, Inc. v. World Programming Limited, Docket No. 21-1542.  The litigation has substantial parallels to Google v. Oracle, but might end up with a different outcome. In Google, the Supreme Court found fair-use but did not decide the issue of copyrightability. That issue is front-and-center in this case.

WPL is a UK based software company who obtained several copies of SAS statistical software and made a clone version. SAS sued in E.D.Tex for both copyright infringement and patent infringement.  The district court dismissed the copyright claims — holding that the software was unprotectable.

Plaintiff SAS showed that it holds a registered copyright, amply argued that its asserted works are creative, and presented repeated evidence of factual copying. … Defendant WPL then came forward with evidence showing that material within the copyrighted work was unprotectable. … SAS thereafter failed to show any remaining protectability, either by affirmatively showing some elements of the work to be protectable or by combatting Defendant’s showing of unprotectability.

Dismissal Memorandum.  SAS also stopped pursuing the patent allegations and they were dismissed with prejudice. Their inclusion in the case appears to have been enough to give the Federal Circuit jurisdiction rather than the Fifth Circuit, even though only copyright issues are on appeal.  I’ll note that a parallel copyright claim was rejected by the U.K. courts who determined that WPS had “reproduced only aspects of the program that are not protected by U.K. copyright law.”  Separately, SAS also previously litigated this copyright case in North Carolina federal court.  That court also granted summary judgment to the accused infringer on the copyright claim.  However, 4th Circuit vacated the copyright holding as moot and that claim was dismissed without prejudice.  Thus, as WPL writes in its brief: “This is the third time SAS Institute Inc. (“SASII”) has sued World Programming Limited (“WPL”) for copyright infringement. It is also the third time courts have rejected SASII’s copyright claims.”

SAS is hoping to change that outcome and has taken its appeal to the Federal Circuit with Dale Cendali (Kirkland & Ellis) leading the charge.  We shall see, but the Federal Circuit is likely one of the most pro-copyright courts in the country.  SAS’s primary arguments on appeal:

WPL’s responsive brief was recently filed by Jeffrey Lamken (MoloLamken). The appellee restates the key copyrightability issue as follows: “Whether copyrights over a computer program protect (a) the functionality of executing programs written by users in a free-to-use computer language or (b) outputs dictated by user-written programs.”

A number of amicus briefs have already been filed in the case supporting the copyright holder.  The the deadline for briefs in support of WPL has not yet passed.

My favorite part of the appellee brief is that the redaction was done in MadLib format: 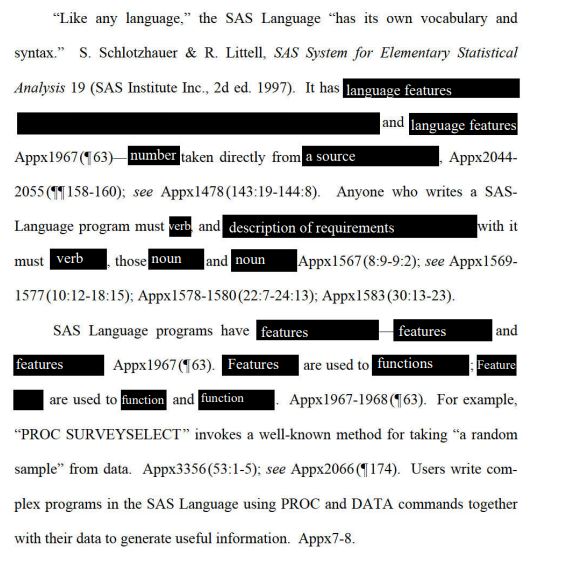 75 thoughts on “Copyrightability of Software: The Next Big Case”