In a recent filing, Brooklyn Brewery (Brewery) indicated plans to take its trademark opposition/cancellation case to the US Supreme Court.  The key constitutional question involves when a TM challenger has Article III standing to appeal an adverse TTAB decision. The issues are parallel to those faced on the patent side by unsuccessful Inter Partes Review (IPR) petitioners who attempt to appeal that loss.

There is a lot going on in Brewery v. Brew Shop, but the question before the Supreme Court focuses on Brewery’s opposition to Brew Shop’s multi-class trademark registration application.  The application covers beer & beer-making-kits (both in Class 32) and also sanitizing products (Class 5).  Brewery challenged registration in both classes (and lost).  On appeal, the Federal Circuit divided up its opinion between the three types of goods.  It ruled on the merits for the beer and beer-making-kits. Brooklyn Brewery Corp. v. Brooklyn Brew Shop, 17 F.4th 129 (Fed. Cir. 2021). But, refused to hear the portion of the appeal relating to the sanitizing products. 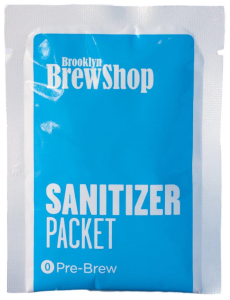 Lack of Standing: With respect to use of the mark on sanitizing products, the appellate court dismissed Brewery’s appeal because the company did not show any concrete injury since Brewery does not compete in the sanitizing product market. “To be clear, an opposer cannot show standing by merely showing the registrant competes with the opposer and receives a benefit from an unlawful trademark.” The parties also do not compete in the beer-making-kit market. However, the court found standing there since “beer-making kits are related to beer and to some extent compete with beer since they are sold in many of the same stores.” And,  according to the court folks who brew beer also drink beer.  (Note that in this video, one of the BBS founders says that she didn’t like beer). It is important to note that the court’s holding here is on Constitutional grounds. The U.S. Constitution prevents the appellate court from hearing an appeal on this particular aspect of the case.

Brewery has not yet filed its petition for writ of certiorari, but it did recently petition the Surpeme Court for an extension of time and that document included the following:

This case presents a substantial and important question of federal law: what must a party show to have Article III standing to appeal an adverse judgment from the Trademark Trial and Appeal Board to the United States Court of Appeals for the Federal Circuit? Below, the Federal Circuit for the first time held that such appellants must show that (1) it competes in the same line of business as the appellee, and (2) failure to cancel or refuse registration of a mark would likely cause the appellant competitive injury. The Federal Circuit’s unprecedented decision contravenes this Court’s decisions, including Lexmark Int’l, Inc. v. Static Components, Inc., 572 U.S. 118 (2014), and, for many litigants, forecloses appellate review of adverse TTAB decisions.

This result is what my old Brooklyn butcher might have termed “slicing the bologna a bit too thin.”  In my view, if a party has Constitutional standing to challenge one aspect of a trademark registration, the Constitution should permit a challenge of all aspects of that application.  You could think of this like having standing to challenge claim 1 of the patent, but not claims 2-4.  That result can happen, but ordinarily requires an affirmative act by the patentee to show that there is no way that any liability would ever flow from those extra claims.

Facts: This was not raised by Brewery’s attorneys, but I’ll also note that my 2 minute internet search revealed the Brooklyn Brewery napkin below–showing that in-fact the company may compete in the sanitizing product marketplace.

In its opposition, the Brewery had argued that Brew Shop’s mark – as used on sanitation products – lacked acquired distinctiveness.  However, the Board did not actually render a decision on that issue.  In some of its briefing, Brewery argues that this situation calls for an automatic remand under the “ordinary remand rule;” and that such a remand does not require the full standing analysis. Brewery En Banc Petition.

As mentioned, the trademark oppositions and cancellation proceedings have a number of parallels to IPR challengers, including the issue of appellate standing for unsuccessful petitioners.  A patent case on the point is pending before the Supreme Court, and we are awaiting the views of the Solicitor General. Apple Inc. v. Qualcomm Incorporated, No. 21-746 (CVSG requested February 22, 2022).

One difference between the Trademark and Patent cases is that the TM opposition statute limits the availability of oppositions to folks who “who believe[] that [they] would be damaged by the registration of a mark upon the principal register” 15 U.S.C. § 1063(a).  What that means is that we already have a decision by the TTAB that Brewery had standing to make these challenges.  The Federal Circuit did not appear to provide any deference to the TTAB’s factual conclusions regarding that issue.  In addition, the court took the unusual stance of avoiding the question of statutory standing in favor of deciding Constitutional standing in violation of the common principle of Constitutional avoidance.

11 thoughts on “Standing in Trademark Opposition and Cancellation Proceedings”