Here is a new example of a Schedule-A case filed in the Northern District of Illinois.

DysonAnonComplaint.  The list of defendants is apparently in Schedule-A, but that document was filed under seal.  The complaint alleges that the defendants are all counterfeiters who operate in “foreign jurisdictions with lax intellectual property enforcement systems” such as “the People’s Republic of China.” They are selling products in the US via online stores such as eBay, AliExpress, Alibaba, Amazon, Wish.com, Walmart, Etsy, and DHgate. The justification for the under-seal filing is similar to that of sealed warrants or sealed indictment in criminal cases.  In particular, the patentee has indicated that it plans to seek a TRO in a way that will preserve evidence:

If Defendants were to learn of these proceedings prematurely, the likely result would be the destruction of relevant documentary evidence and the hiding or transferring of assets to foreign jurisdictions, which would frustrate the purpose of the underlying law and would interfere with this Court’s power to grant relief. Once the temporary restraining order has been served on the relevant parties and the requested actions are taken, Dyson will move to unseal these documents. 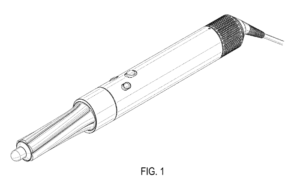 Dyson’s patent here is U.S. Design Patent No. D853,642 and appears to cover its “Airwrap” product.  [$699 on Amazon]. According to RPX, the patentee here has already sued 1,000+ defendants for infringement even before this actions.