This morning I created a dataset of prosecution information for 462 randomly selected utility patent applications filed in December 2004 and January 2005 to get a sense of where those applications stand after 4 ½ years of prosecution. Overall, 48% of the applications have issued as patents; 26% have been abandoned; and 26% are still pending. (Note – I excluded the 12% of cases from my sample that were never published as applications because data is not available for most of them).

Table 1 below shows the detailed status for each case as provided by the USPTO’s PAIR system. All but two of the pending cases have received at least an initial examination. The two still-unexamined cases are both software-related applications.

An often frustrating aspect of application pendency is that abandoned cases can be kept alive by filing a continuation application. Of those cases that have been either patented or abandoned, 25% have one or more descendents in the form continuation or CIP applications. (I have not determined whether those continuations are themselves still pending.)

Of the cases already completed (no longer pending), the median patent took 2.6 years to issue while the median abandonment did not occur until 3.1 years into prosecution. Along this line, the longer a case was pending, the greater the likelihood that the case was abandoned. Thus, 71% of cases that were pending for fewer than three years were allowed while only 29% of cases that were pending for three to four and a half years were allowed. 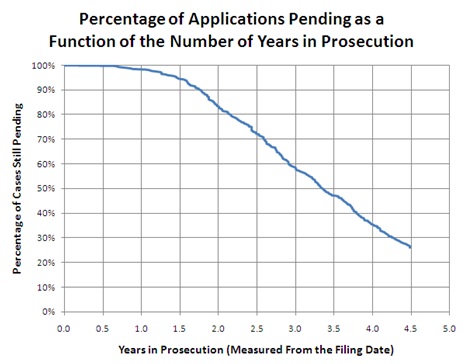