One post-Heartland topic of some interest is the question of proper venue in multi-district states such as Illinois, which has a northern, central, and southern district.

District vs State: The patent venue statute states that a “civil action for patent infringement may be brought in the judicial district where the defendant resides…” 28 U.S.C. 1400(b).  In TC Heartland the Supreme Court held that “a domestic corporation ‘resides’ only in its State of incorporation for purposes of the patent venue statute.”  TC Heartland LLC v. Kraft Foods Group Brands LLC, 137 S. Ct. 1514 (2017).

The problem: TC Heartland defines residence at the state level, but 1400(b) requires a district-by-district focus — “the judicial district where the defendant resides.”

In Missouri, for instance, we have an Eastern and Western District with our state capitol Jefferson City (home of the corporate registration database) situated on the Western side.  Does a Missouri corporation reside in the W.D. since that is the true birthing site of the legal corporation?; Rather does the company reside solely in the district of its HQ?; What if the company is merely registered in Missouri, but no longer operates here?; What about 1391(d)’s focus on the district of “most significant contacts”? 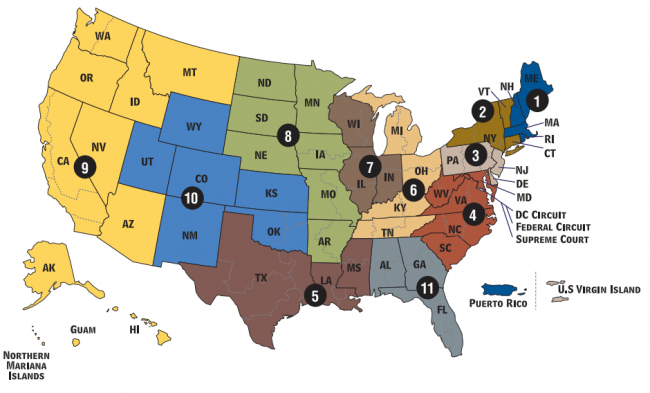 The most compelling case-in-point is likely Stonite Products Co. v. Melvin Lloyd Co., 315 U.S. 561 (1942).  In Stonite the Supreme Court was interpreting a prior version of 1400(b), but confirmed that “an inhabitant of the Eastern District of Pennsylvania” could not be sued in the “in the Western District of that State” without a “regular and established place of business” in that western district.  A problem with Stonite is its cryptic language and that the prior statute used the word “inhabitant” instead of “resident.”

In the one post-Heartland decision on the subject, E.D. Tex. Judge Gilstrap disagreed with the Supreme Court’s Stonite decision – holding instead that “a domestic corporation resides in the state of its incorporation and if that state contains more than one judicial district, the corporate defendant resides in each such judicial district for venue purposes.” Diem LLC v. BigCommerce, Inc., 6:17-CV-00186, 2017 WL 3187473, at *2–3 (E.D. Tex. July 26, 2017). Distinguishing Stonite, Judge Gilstrap wrote that the particular issue was not actually before the court in Stonite but rather, “The only question presented … is whether Section 48 of the Judicial Code … is the sole provision governing the venue of patent infringement litigation.” Stonite. Gilstrap writes:

This Court … sees no basis to impose an additional requirement, neither present in the statute nor discussed by the Supreme Court in TC Heartland, absent a clear directive to do so.

Residency of Corporations in States With Multiple Districts.— [I]n a State which has more than one judicial district and in which a defendant that is a corporation is subject to personal jurisdiction at the time an action is commenced, such corporation shall be deemed to reside in any district in that State within which its contacts would be sufficient to subject it to personal jurisdiction if that district were a separate State, and, if there is no such district, the corporation shall be deemed to reside in the district within which it has the most significant contacts.

The problem with applying this statute is that the whole point of TC Heartland was to focus attention on the patent venue statute and away from these more general definitions.