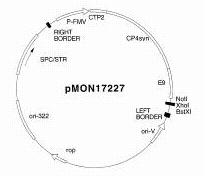 After being shut-out at the district and appeals courts, Mississippi Delta Farmer Homan McFarling has petitioned the Supreme Court of the United States for a writ of certiorari — asking the high court to hear his case.

Roundup-Ready (R) soybeans have become extremely popular in the the U.S.  The genetic modification added by Monsanto allows soybean plants to resist the broad-leaf herbicide.  Monsanto’s patents on the genetically modified seed is even more important now because Roundup has gone off-patent.

When a farmer purchases seeds from Monsanto, the company requires that the farmer agree not to retain any seeds from the resulting crop for replanting.  These second generation seeds are genetically identical to the ones originally purchased — and thus, fall under the scope of the patents.  Monsanto brought suit against McFarling after the farmer violated his agreement and saved second generation soybean seeds to replant his 5,000 acre farm.

In my quick review of the briefs for and against certiorari, it appears that Monsanto’s attorneys have put their best foot forward by showing that there are no true circuit splits, a key feature in the Supreme Court’s decision whether to accept a case on appeal.  All the same, McFarling’s case has a certain flair that may push the court to accept the case.