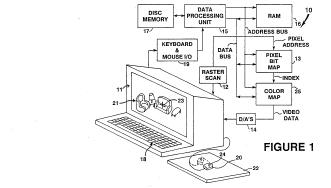 In 1991, Beasley filed a patent application directed to the generation of images on a video screen using a light pen that operates by mapping the screen into a memory on a point-by-point basis.

The patent appeals board (BPAI) found that the invention was obvious based on prior art patents cited by the patent examiner during prosecution.  Beasley then appealed to the Court of Appeals for the Federal Circuit (CAFC).

On appeal, Beasley argued that the examiner never established a prima facie case of obviousness.  Specifically, Beasley urged reversal because there was no motivation or suggestion to combine the references cited by the Examiner and BPAI.

The Court agreed with Beasley and reversed the BPAI’s rejection — finding that:

The record reflects that the examiner and the Board have managed to find motivation for substituting one type of memory for another without providing a citation of any relevant, identifiable source of information justifying such substitution. The statements made by the Examiner, upon which the Board relied, amount to no more than conclusory statements of generalized advantages and convenient assumptions about skilled artisans. At least under the MPEP then in effect, such [conclusory] statements and assumptions are inadequate to support a finding of motivation, which is a factual question that cannot be resolved on subjective belief and unknown authority.

In Dissent, Judge Dyk would have affirmed the obviousness rejection.

I see no error in the Board’s reliance on the PTO’s own specialized knowledge [for a motivation to combine]. The effect is merely to create a prima facie case, and to shift the burden to the patent applicant. Here the applicant did not refute the factual findings of the Board and the patent examiner, but merely offered lawyer argument to contradict the Board’s findings. Under these circumstances the application was properly rejected.

With this said, I agree that the MPEP provision in effect at the time is not a model of clarity and can be read as recognizing only a very limited scope for the use of the PTO’s expertise. MPEP § 2144.03 (7th ed. 1998). However, the current version appears to allow greater latitude. MPEP § 2144.03 (8th ed., rev. 2, 2004). In future cases, where the PTO has provided us with an interpretation of the new MPEP provisions, we will need to address the extent to which the new version of the MPEP gives the PTO greater scope to rely on its own expert knowledge.