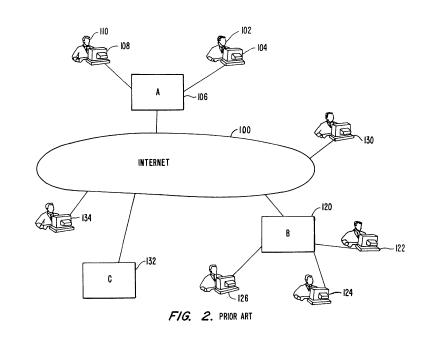 Eolas and the University of California sued Microsoft for infringement of its patent that involves a method of using a web browser to open third-party applications using plug-ins.  The District Court for the Northern District of Illinois granted final judgment to Eolas after a jury found that Microsoft infringed the patent and actively induced United States users of Internet Explorer to infringe. The district court also invoked 35 U.S.C. § 271(f) to include foreign sales of Internet Explorer in the royalty awarded to Eolas.  The jury awarded Eolas a royalty of $1.47 per unit of infringing product, which amounted to a total award of $520,562,280.

Finally, the biggest news from a patent law perspective is that the Court affirmed the district court’s holding that "components," according to section 271(f)(1), include software code on golden master disks.

The district court found as a matter of law that an early demonstration of a browser ("Viola") had been abandoned, suppressed, or concealed under 102(g) and thus was not available as prior art against Eolas’ patent. As a consequence, the Jury did not consider Microsoft’s anticipation and obviousness defense.  The Federal Circuit disagreed, finding that Viola was not abandoned.  Rather, according to the CAFC, the prior art browser was improved and re-released as a new version:

Because creating an improved version of an invention does not in any sense abandon the original invention, the district court erroneously excluded [the reference] as prior art.

In the new trial, the jury will be allowed to consider the earlier browser in determining whether the Eolas patent is anticipated or obvious.  The court must also reconsider whether Eolas’ failure to submit the references to the PTO during was a form of inequitable conduct that may make the patent invalid.

Because this court "consistently declines to construe claims according to the preferred embodiment," this court agrees with the district court that Microsoft’s proposed construction, limiting "executable application" to stand alone programs, does not comport with the entire technological and temporal context for this term.

International Application of the Law 271(f):

A "component" of a process invention would encompass method steps or acts. See, e.g., 35 U.S.C. § 112, ¶6 (2000). A "component" of an article of manufacture invention would encompass a part of that construct. Because a computer program product is a patented invention within the meaning of Title 35, then the "computer readable program code" claimed in claim 6 of the ’906 patent is a part or component of that patented invention.

Thus, the software code on the golden master disk is not only a component, it is probably the key part of this patented invention. Therefore, the language of section 271(f) in the context of Title 35 shows that this part of the claimed computer product is a "component of a patented invention."