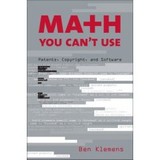 Math You Can’t Use

Klemens is a scholar, but doesn’t really write like one — rather he tells a story and wraps the story around his argument.  His bottom line argument is that software should not be patentable. Here are some of his arguments:

1) Software is simply math (Church-Turing thesis) and math is not patentable.  His conclusion — that software should therefore be unpatentable — strikes me as odd.  Klemens leads us down the parade of horribles of granting 15 years of exclusivity to mathematical algorithms.  The bad results are (a) mathematicians being forced to pay royalties when a patent is valuable and (b) the Church-Turing thesis itself being patented.

2) The PTO is bad at granting patents and therefore should not grant software patents.

3) Patents only work well in industries with a few major players.  The software industry is decentralized (with lots of small players) and therefore should not be covered by patents. . .

Of course, Klemens may gain more traction with his explanation of how aggressive patent enforcement could kill the internet as a whole.

8 thoughts on “Book Review: Math You Can’t Use”