Both Brown and Barbacid claim to have invented a method for inhibiting cell growth control factors (farnesyl transferase). The effective filing dates at the PTO were April 18, 1990 and May 8, 1990 respectively.

In an interference proceeding, the PTO’s BPAI found that Brown had the earlier conception date, but that the early date was moot because Brown had “failed to provide corroborated evidence of diligence” in reducing the invention to practice.

Under 35 USC 102(g), the party that is the first to conceive of an invention is entitled to a patent over a later inventor — so long as the early inventor “exercised reasonable diligence from a time before the other party’s conception date to his own reduction to practice date.”

The CAFC found the time-line in this case as follows:

Thus, in order to ensure priority over Barbacid, Brown must show continual diligence from before March 6 to April 18.  Furthermore, evidence is required to corroborate claims of diligence. However, such evidence can come from a variety of sources and is generally less rigorous to prove than conception.

Here, the BPAI refused to find diligence, and specifically found that the researcher’s laboratory notebook to be too cryptic to provide useful evidence. The appellate panel disagreed, finding that the evidence should be considered as viewed by persons skilled in the art. Specifically, there is no need to “reproduce on each page a statement of the larger research purpose” of the experiment because “this purpose may reasonably be shown in the various declarations.” 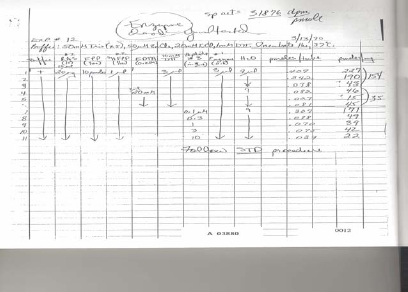