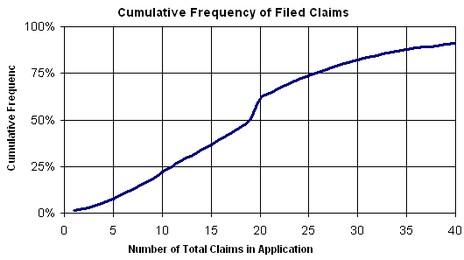 Of course, the issue here is cost. The USPTO charges a fixed thousand-dollar fee for applications filed with twenty-claims or fewer. Each additional claim is fifty bucks. (Fees are halved for small-entities).

Interestingly, this data spans across a change in the Patent Office fee structure.  Before December 2004, fees for extra claims were only eighteen dollars each.  At first glance, the thirty-two dollar jump from eighteen to fifty is seemingly de minimis when compared to the thousands of dollars in attorney-fees associated with the filing (not to mention R&D costs).  As it turns out, a significant number of patentees responded to the change in fee structure by filing fewer claims. Prior to the rule change, for instance, about sixty-one percent of applicants stayed within the twenty-claim guideline. After the rule change, sixty-five percent filed no more than twenty claims.

This is one example of how patent applicants are sensitive to even small changes in administrative fees. The data is important because it gives credence to suggestions that the USPTO fee structure can serve as a successful policy instrument.  For instance, rather than limiting the number of claims or continuations to hard numbers, the PTO might want to simply apply a high surcharge and let the market go.  The data also gives empirical support for ideas such as Lemley, Lichtman, & Sampat Gold Plating.

13 thoughts on “Evidence Based Prosecution I: Sensitivity to Claim Fee Variation”