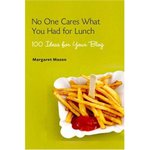 New blogs that I recently found:

I continue to enjoy: