The politics of patent law is somewhat confusing. Those with the most at stake — innovator pharmaceutical companies — lean heavily toward a Republican party affiliation. Along that line, it is Democrats — with the support of California technology companies — who are pushing through Congressional patent reform measures that would weaken the strength of patent rights.  On the other hand, the current US Patent Office Republican administration has taken major steps to tighten the patent prosecution rules of practice.  These rule changes are most vehemently opposed by the innovator pharmaceutical companies and supported by many west coast technology companies.

The judiciary has also been thought to be a mixed bag — without any identifiable liberal-conservative ideologic divide.  In a new paper, DePaul Professor Matthew Sag and his colleagues from Northwestern (Jacobi & Sytch) prove that presumption wrong — at least for Supreme Court decisions. They find that throughout the past several decades, liberal Supreme Court justices tend to rule Against the IP Owner (XIPO) significantly more often than their conservative counterparts.  In other words — conservatives tend to support IP rights while liberals tend to deny those rights. The figure below, excerpted with permission from the paper, shows the trend based on Martin-Quinn scores of judicial ideology. Interestingly, the effect holds across all the various areas of IP law. 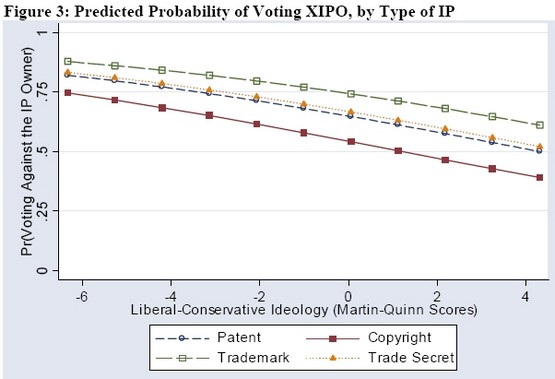