The following chart does not tell us whether the size of the patent document makes any difference. It only tells us that the average patent has grown considerably over the past twenty years. 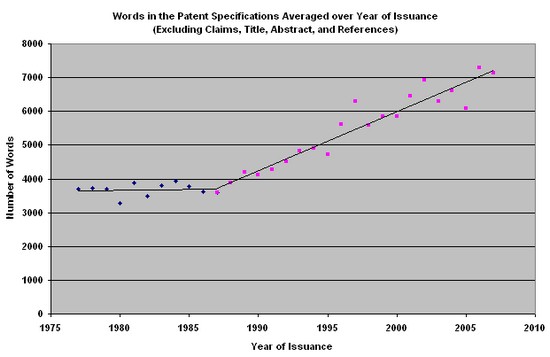 To create the chart, I obtained a sample of 10,000 patents issued between January 1977 and December 2007 and counted the number of words in the description of the claimed invention. This excludes claims, title, abstract, references, and other identifying information.  To amplify the results, I added two trend-lines. The first trend-line runs from 1977 to 1987 and has essentially no slope — indicating that description size remained steady over those years. The second trend-line runs from 1987 – 2007 and has a clearly positive trend-line indicating that the number of words is increasing over time.

85 thoughts on “Does Size Matter? Counting Words in Patent Specifications”