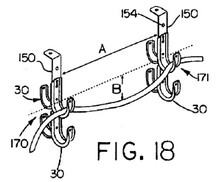 Claim 17 of Erico’s patent covers a method of supporting communication cables with saddle-hooks so that the sag distance (B) is less than 30 cm.  During an earlier reexamination, the PTO cancelled several claims, but the validity of claim 17 was reaffirmed. Doc’s copied Erico’s saddle-hook design (called j-hooks) and follows the patented method in its daily business. Litigation ensued.

During litigation, the district court granted a preliminary injunction against Doc’s — finding that Erico had sufficiently satisfied the traditional four factor test of equitable preliminary relief: (1) patentee’s likely success on the merits; (2) irreparable harm associated with continued infringement; (3) a balance of hardships favoring the patentee; and (4) the public interest favoring preliminary relief.

Preliminary Injunction: For preliminary relief, the first factor is critical. Without showing probable success, a plaintiff has no chance of succeeding on the motion. More to the point, this usually requires proof of infringement of a valid enforceable claim. Here, the lower court considered issues of novelty, obviousness, and inequitable conduct in determining that the asserted claim was likely valid and enforceable.

Substantial Question of Validity: On appeal, the CAFC vacated the PI, finding that the defendant had raised sufficiently “substantial question of invalidity to show that the claims at issue are vulnerable.”  According to the divided appellate panel (Judges Rader & Dyk), the threshold substantial question is met when the evidence “cast[s] doubt on the validity” of the asserted claims.

Here, the panel was able to find doubt because of a combination of prior art and their “reasonableness” of combination.

Looking next at secondary considerations of validity, the majority panel found that such considerations cannot overcome the reasonable inference found above.

Abuse of Discretion: A preliminary injunction is overturned only for clear error or mistake of law. Consequently, the majority’s holding is not simply a difference of opinion — rather it is a finding that the lower court committed an abuse of discretion by weighing the validity issues in the patentee’s favor.

Preliminary injunctions were difficult to obtain even before the Supreme Court’s decision in EBay and KSR. This decision simply moves the ratchet another half turn.

In Dissent, Judge Newman makes three primary arguments: (1) that preliminary injunctions should be easier to obtain because they preserve the status quo; (2) that the first factor of equitable relief should not determine the outcome (all four factors must be considered); and (3) that, even if the first factor is most important, a defendant simply ‘casting doubt’ on a patent’s validity is not sufficient. Rather, the inquiry should focus on which party is more likely to actually succeed on the merits.

58 thoughts on “CAFC: As a Matter of Law, Preliminary Injunction Defeated by “Casting Doubt” on Patent’s Validity”