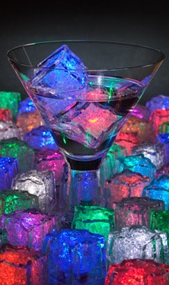 Short Summary: (1) Subject Matter Jurisdiction is satisfied by a well pled complaint, even if the accused infringer is foreign and the infringing activity is potentially outside the US; (2) In an infringement analysis, a product may be considered “sold” in the US even though title is transferred abroad – so long as the seller deals directly with US customers and then ships the product to the US.

Litecubes are artificially illuminated pseudo-ice cubes. The company asserted both patent and copyright protection against GlowProducts of Canada.  Although GlowProducts has no US facilities or assets, the company does sell and ship directly to US customers.

Well pled complaint rule: Under the well pled complaint rule, subject matter jurisdiction is satisfied by a complaint that establishes “either that federal patent law creates the cause of action or that the plaintiff’s right to relief necessarily depends on resolution of a substantial question of federal patent law.”  Here, because Lightcubes complaint pled each element of the infringement statute (35 USC 271(a)), the federal court properly has jurisdiction.

“Thus, in these respects, a limitation on the extraterritorial scope of a statute is no different than any other element of a claim which must be established before relief can be granted under a particular statute.”

Thus, the district court should have rejected GlowProduct’s subject matter jurisdiction claims without even considering whether any products were actually imported into the U.S.  Rather, Litecubes satisfied the SMJ requirement by alleging US infringement in the complaint:

“by alleging a violation of § 271, has properly invoked federal question jurisdiction under § 1331 and § 1338. This jurisdiction does not depend on whether Litecubes is able to succeed on the merits in proving all of the elements of patent infringement that it alleged in the complaint.”

Applying a parallel analysis, the CAFC likewise held that the issue of territoriality of copyright infringement is “properly treated as an element of the claim which must be proven before relief can be granted, not a question of subject matter jurisdiction.”  Of course, foreign companies charged with infringement can still escape the court’s reach if there is a lack of personal jurisdiction. “In many such cases, the court may not have personal jurisdiction over the defendant.”

Sale in the US: GlowProducts argued that it had not made any US sales. In particular, the Canadian defendant argued that the sales were made in Canada and then shipped f.o.b.. On appeal, the CAFC found that that the location of a “sale” under Section 271 should not be limited by any formalistic rules.  Citing its 1994 North American Philips case, the appellate panel held that foreign company’s “sale” may properly be considered within the US if the seller deals directly with US customers and then ships to the US — regardless of whether title to the goods was legally transferred in another country.

13 thoughts on “Territorial Limits of Infringement via Sale”