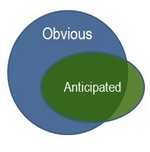 Perhaps the most important portion of this case relates to the notion that novelty and nonobviousness are separate and distinct inquiries. And, that a patent may be found anticipated yet nonobvious.

On summary judgment, the district court Cohesive’s HPLC patent might be obvious, but certainly was not anticipated.  Water appealed — arguing that the judgment was logically incorrect if anticipation truly is the “epitome of obviousness.”  On appeal, however, the Federal Circuit confirmed that novelty and obviousness are separate and distinct — one does not necessarily follow the other.

“While it is commonly understood that prior art references that anticipate a claim will usually render that claim obvious, it is not necessarily true that a verdict of nonobviousness forecloses anticipation. The tests for anticipation and obviousness are different.

The court also gives an example —

“Consider, for example, a claim directed toward a particular alloy of metal. The claimed metal alloy may have all the hallmarks of a nonobvious invention—there was a long felt but resolved need for an alloy with the properties of the claimed alloy, others may have tried and failed to produce such an alloy, and, once disclosed, the claimed alloy may have received high praise and seen commercial success. Nevertheless, there may be a centuries-old alchemy textbook that, while not describing any metal alloys, describes a method that, if practiced precisely, actually produces the claimed alloy. While the prior art alchemy textbook inherently anticipates the claim under § 102, the claim may not be said to be obvious under § 103.” 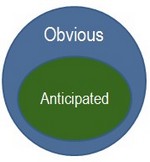 Judge Mayer dissented — arguing that anticipation is a subset of nonobviousness. “Although a claimed invention can be obvious but not anticipated, it ‘cannot have been anticipated and not have been obvious.’ In re Fracalossi, 681 F.2d 792, 794 (CCPA 1982).”

“The majority’s assertion that a claim can be anticipated but not obvious, flies in the face of a long line of precedent to the contrary. Not surprisingly, it is unable to cite a case remanding to the district court for consideration of anticipation, while at the same time sustaining a determination that claims at issue are not obvious.”

The practical impact of this case:

145 thoughts on “Anticipated yet Nonobvious”