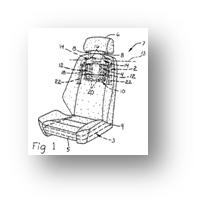 Responding to an interlocutory petition for a writ of mandamus, the Federal Circuit has ordered a patent case transferred from Judge Ward’s courtroom in the Eastern District of Texas to the Southern District of Ohio. Both venues were “proper,” but the appellate panel found the Ohio venue “far more convenient.”

In 2007, Michigan based Lear Corp (not Lear Jets) sued TS Tech for infringing its patent covering a pivotable vehicle headrest. The accused TS headrest assemblies were supplied to Honda and used in the Civic and Accura RDX. TS is a Japanese company, but the defendants are TS’s North American subsidiaries headquartered in Ohio and Canada.

In 2008, the Fifth Circuit (TX, LA, MS) decided another venue case on mandamus – finding that cases should be transferred from the Eastern District of Texas when the new venue is “clearly more convenient.” In re VW (5th Cir. 2008) (en banc)(cert petition pending). On mandamus, a lower court’s refusal to transfer will only be reversed if it produces a “patently erroneous result.”

Here, the lower court erred in its application of 5th Circuit law in several ways:

Patently erroneous: Although “patentably erroneous” is difficult to define, the Federal Circuit found the errors sufficient to grant the writ. They reasoned that the 5th Circuit VW case – where mandamus was also granted – was based on essentially identical errors.