Every proposed patent reform measure includes an expanded role for the US Patent & Trademark Office’s administrative patent court – known today as the Board of Patent Appeals and Interferences, the BPAI, or simply the Board. Even without legislation, the role of the BPAI has expanded greatly in the past few years. The number of ex parte appeals in FY2009 is expected to at least double the record-filing of 6,400 appeals in FY2008. I suggest that two factors have led to this short term dramatic rise in appeals: (1) an increase in rejection-rate by patent examiners; and (2) attempts by the PTO to limit non-appeal avenues for achieving full claim scope. These limits include the PTO’s proposed rules that would curtail the applicant’s ability to file multiple requests for continued examination (RCEs), continuation applications, and a multitude of claims. Although these rules have only been threatened, they impact appeal practice because they may apply to already-pending applications. Although more gradual, two additional influences on the rise in appeals include: (1) the continued perceived value of patent rights and (2) the continued rise in the number of patent application filed each year.

During patent prosecution, an applicant has a right to appeal to the Board after its application is twice rejected. 35 U.S.C. 134. In this short article, I look at how the Board responds to those rejections on appeal. Many appeals involve multiple rejections each of which may be affirmed or reversed. In addition, the Board occasionally introduces a new ground for rejection even after reversing an examiner decision. This analysis opens-up these decisions and provides data issue-by-issue.

My data comes from two primary sources. First, using Westlaw, I downloaded copies of the approximately 6,000 ex parte BPAI decisions issued between January 2008 and May 2009. Using an automated script, I extracted data from each of those appeals, including the holding and the extent of discussion of various issues. (i.e., how often “obviousness” or “enablement” is discussed in the opinion.) In addition, just under 200 ex parte decisions from 2009 were randomly selected and scored by hand to determine how the BPAI decided individual issues within the appeals. Board decisions typically identify a series of issues and then decide each issue. In Ex Parte Cypher, 2009 WL 1162435, 2008-4722, (Bd. Pat. App. Inter. 2009), for instance, the Board identified two issues: “(1) Claims 1-4 … are rejected under 35 U.S.C. § 103(a) as being unpatentable over Loh in view of McFarling. (2) Claims 9-11 … are rejected under 35 U.S.C. § 103(a) as being unpatentable over Loh and McFarling in view of Yeh.” In Cypher, both issues were affirmed. As a consequence, the data for this case reflects that two obviousness issues were raised, both of which were affirmed.

In the hand-scored sample, the average Board decision considered 2.1 issues (median of two issues). Approximately 61% of decided issues are affirmed on appeal and 39% are reversed. (In this study, fewer than 1% of issues were expressly not decided.) The issue-by-issue analysis fits with the overall holdings for cases on appeal. In the hand-scored sample, 59% of the cases were affirmed as a whole, 12% were affirmed-in-part, and 29% were reversed. (This sample parallels the Board’s own statistics for FY2009 which indicate that 60% of its decisions on the merits are affirmances, 15% affirmance in part, and 25% reversals). Table 1 shows the issue-by-issue results alongside the overall case-holding for the hand-scored sample.

As you might expect, when there is a strong correlation between the overall case holding of an appeal and the holdings on individual issues at issue in the appeal. When the overall case-holding is affirmed, the vast majority of issues are also affirmed. However, in the hand-scored sample, about 10% of cases that were affirmed included some individual issues that were reversed. Often, the reversed issues were rejections argued by the examiner in the alternative. In Ex Parte Mcquiston, 2009 WL 598537, 2008-3224 (Bd. Pat. App. Inter. 2009), for instance, applicant’s claim 1 had been rejected as (1) anticipated by Golds; (2) obvious over Golds; (3) anticipated by Simso; and (4) obvious over Simso. The Board rejected the first three of these rejections, but the claim remained unpatentable as obvious over Simso and the examiner’s decision affirmed as a whole.

Table 2 compares the case-holding with the issue-by-issue analysis based on our hand-scored sample of 200 BPAI decisions. As seen in Table 2, when a case is affirmed-in-part, roughly half (on average) of the issues are affirmed and half are reversed. In cases that were reversed, every issue was also reversed. (?2 P<.01).

Number of Issues on Appeal: In Mcquiston, the applicant needed to address each alternate reason for rejection in order to win on appeal. In most cases, however, each claim is rejected for only a single reason – usually obviousness. See infra. The applicant can then choose how to group issues on appeal. If, for instance, claims 1-10 are each rejected as obvious, the applicant could choose to argue each claim separately or cluster the claims into one or more groups that are then argued as a unit. Chart 1 uses the hand-scored data to presents the likelihood of a particular case-holding as a function of the number of issues on appeal. 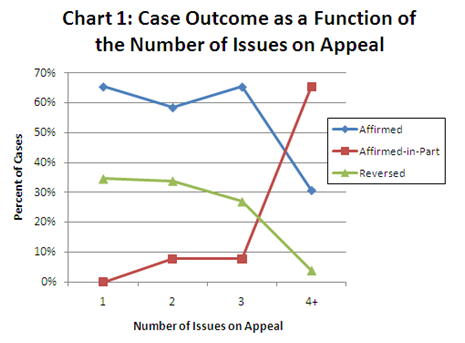 When only one issue is presented, the result in the case tracks the result of that issue. As more issues are presented, the likelihood of a split affirmed-in-part decision rises dramatically while the likelihood of either complete affirmance or complete reversal drops. Chart 2 is a cumulative frequency for the number of issues presented on appeal. In our sample, the number of claims ranged from 1 to 8. The median was 2 claims and the mode 1 claim. About 94% of decisions discussed four or fewer issues. 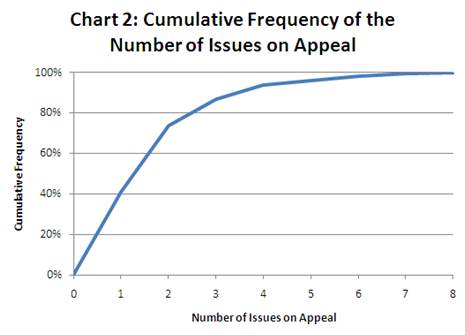 The Board is authorized to offer new grounds for rejection, and did-so in about 4% of the cases in the hand-scored study. The most common new ground was for obviousness.

Obviousness: Obviousness is the bread and butter of patent examinations. In this study, I also show that it is the mainstay of BPAI ex parte appeals. 90% of appeals in my hand-scored study included at least one obviousness issue that was decided on appeal. More than half of the appeals (54%) focused only on obviousness. The closest runner-up issue – anticipation – was an issue in 37% of the appeals. Other issues on appeal (each with a frequency of < 5%) included in descending frequency: written description requirement; indefiniteness, patentable subject matter, obviousness-type double patenting, and enablement.

The pervasiveness of obviousness issues is further confirmed by the larger sample of 6,000 ex parte decisions issued between January 2008 and May 2009. Using a parsing script, I looked for discussions of obviousness issues by counting the number of times that the terms such as “obvious” and “35 U.S.C. § 103(a)” appeared in each opinion. In that sample, 87% of the decisions discussion obviousness while only 13% do not discuss obviousness. Table 4 shows the roughly parallel results.

The far right column of Table 5 provides a compelling statistic. 358 cases in the sample had no discussion of either obviousness or novelty. Of those cases, 74% were reversed on appeal.

Technology Center Specific Results: Patent examination is divided amongst various technology centers. Although the substantive patent laws do not vary across technology lines, patent practice can vary greatly. The BPAI regularly updates a statistical breakdown of its opinions by tech center. [Link]. Table 6 is derived directly from the BPAI statistics for FY2009 through May 2009 and shows the percentage of decisions on the merits from each tech center that arrive affirm, affirm-in-part, or reverse, respectively.

Focusing in on obviousness again, it is interesting to see that appeals from Tech Center 1600 (Biotechnology and Organic Chemistry) are the least likely to discuss obviousness. The most appeal decisions emerge from Tech Center 1700 (Chemical and Materials Engineering), and those appeals are the most likely to include a discussion of obviousness. In particular, a discussion of obviousness is found in 92% of TC 1700 appeals but only 76% of TC 1600 appeals. (?2 P<.01). The difference is partially explained by TC 1600’s more rigorous application of the Section 112 issues of written description, enablement and indefiniteness. Table 6 is again derived from the automatically-parsed sample of 6,000 Board decisions. For each tech center, Table 7 indicates the percent of cases that discuss obviousness; both obviousness and novelty; novelty; and neither obviousness nor novelty. This table again highlights (1) the focus of the PTO on obviousness issues (and to a lesser extent novelty issues) and (2) the differences of TC 1600 from the rest of patent practice.