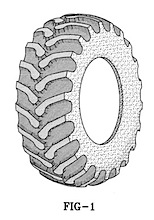 Titan (the patentee) and Goodyear (the exclusive licensee) combined to sue Case for infringement of its tractor tire design patent. (Des. Pat. No. D. 360,862). The district court rejected Goodyear’s motion for preliminary injunctive relief – finding that the evidence indicated that the patent claim was probably obvious. On appeal, the Federal Circuit affirmed.

Standard for Preliminary Relief: In order to obtain the “extraordinary” relief of a preliminary injunction to stop infringement before a final judgment, the a patentee must prove that “(1) it is likely to succeed on the merits, (2) it is likely to suffer irreparable harm in the absence of a preliminary relief, (3) the balance of equities tips in its favor, and (4) an injunction is in the public interest.” The likelihood of success requires proof that the patentee “will likely prove infringement, and that it will likely withstand [validity] challenges, if any.” When a defendant challenges a patent’s validity, the district court must weigh the evidence (both for and against) to determine whether the challenge “raises a substantial question” of validity.

The trial court’s decision on preliminary injunctive relief is reviewed for abuse of discretion.

Obviousness of Design Patents: Design patent claims are subject to the nonobviousness requirement of Section 103(a) — asking whether “the claimed design would have been obvious to a designer of ordinary skill who designs articles of the type involved.” However, it is unclear how KSR applies to design patent cases. Unfortunately, this decision provides no answers except that “it is not obvious that the Supreme Court necessarily intended to exclude design patents from the reach of KSR.”

“[W]e cannot say the trial court abused its discretion in concluding that Titan was unlikely to withstand Case’s challenge to the validity of the ’862 patent on obviousness grounds.

54 thoughts on “Preliminary Injunctions and Obviousness in Design Patent Law”