In an earlier post, I reported on an odd complaint that charges Summit Entertainment with patent infringement based on that company's making and distributing the film "Knowing" that stars Nicholas Cage. In preparation for this post, I watched the movie this past weekend and also contacted the attorneys representing Global Findability.

In the movie, Cage plays the role of an MIT physics professor who sees a string of numbers and correctly determines that those numbers represent prophetic information about particular catastrophic events. In particular, the string of numbers were indicative of the coordinates of the event (lat and long) as well as the date and number of people killed in each event. (Screenshot below). It turned out that the numbers were whispered to little kids by angels/aliens. (I thought they were angels, but my daughter (age 5) thought they were aliens.) The kids then wrote-down the numbers.

As it turns out, Global Findability's asserted patent (No. 7,107,286) covers devices, mediums, and methods for storing global position information (longitude, latitude & altitude) as a single "all natural" number.

Without revealing their particular theory of infringement, Global Findability's attorney agreed that the allegation is "based on the claimed method being performed in the movie." In perhaps the most relevant sequence from the movie, Cage's character identifies a particular sequence of numbers and enters them into Google Maps as a latitude and longitude. The result is a New York City location. Those latitudes and longitudes appear to be actual (rather than made-up) — providing some amount of credibility to the claims of infringement.

As far as I know, this is the first time that I have seen charges of infringement based upon a performer's actions. 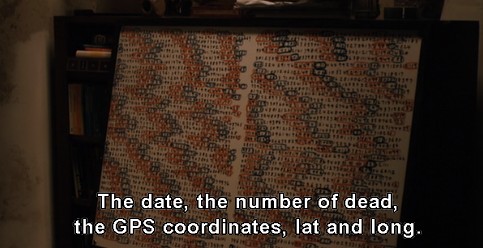 If the case continues to judgment, its outcome will likely turn on questions of infringement and patentable subject matter. Notably, the asserted method is for encoding the single number, while Cage's character only decoded the material. Likewise, there was no indication that the child-actors writing the codes performed the "converting step." Rather, that was done by the angels/aliens presumably acting outside of the US. See RIM v. NTP (each step of a method must be performed within the US). Of course, in creating the script/props, the production company most likely performed the encoding step. One problem with that theory is that the movie was filmed in Australia. These issues could be eliminated if the plaintiffs somehow proved that the "use" distributing/screening the film involved "use" of the method. However, in my mind that theory is extremely lacking.

This case is also interesting as it sits in the shadow of the Supreme Court's hearing in Bilski v. Kappos. That case questions the patentability of newly created methods that are not directly tied to a "machine." In 2004, Andrew Knight filed a series of patents covering various storylines or plots. Cleverly, Knight included a limitation that the plot is within a movie stored on a DVD (or other computer-readable file). Those patents have been rejected as lacking patentable subject matter under Section 101 and are now on appeal to the Board of Patent Appeals (BPAI). In his rejection, the examiner indicated that:

As is often the case, the Examiner's conclusions regarding Knight's patent applications likely correct even though his explanation is lacking. 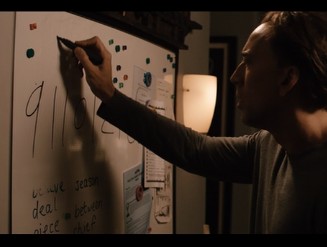 Notes: During prosecution, the applicant (Global Findability) amended the claims to indicate that the single number representation of location was an "all-natural" number. That point was boldly emphasized in a response to an office action rejection. However, "all-natural numbers" are not defined in the specification or in the prosecution history.

89 thoughts on “Patents and the Movie Industry: Stopping Nicholas Cage”