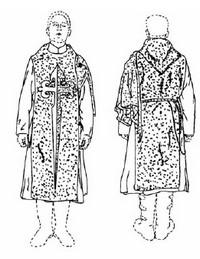 If nothing else, the caption of this case is interesting. In 2009, the Trademark Trial and Appeal Board (TTAB) agreed with Mary Queen of the Third Millennium that the Foundation for a Christian Civilization’s “habit” could not be registered as a trademark because (1) the habit was not inherently distinctive and (2) the habit had not acquired distinctiveness. On appeal the Federal Circuit affirmed without opinion.

According to my source (Wikipedia), the Foundation is an alternate name for the American Society for the Defense of Tradition, Family and Property — “an organization of Roman Catholic Inspiration” that “opposes liberal and egalitarian ideas, policies, and trends.” The Foundation traditionally funded a Catholic counterrevolution against communism. Mary Queen of the Third Millennium is part of the a Vatical recognized “private association of Christ’s faithful.”

Members of both organizations wear the habit with its identifying markings.

11 thoughts on “Trade Dress Registration Rejected Out of Habit”