In 1993 and 1994 Kyle Morris and William Kirksley filed several patent applications all directed toward animated captioning “coordinated with oral-word utterances.”  The idea was to actually see the words coming from the mouth of the speaker in a movie or television program. The patents were assigned to their new company ReadSpeak.   Morris brought-in Don Moody to help develop a new children's television show. However, after a falling-out, Moody left and started the successful Word World show that was broadcast on PBS beginning in 2007.  Word World does not use captions streaming from the mouths of actors. Rather, objects and characters in the television show are made-up of word-objects.  As the district court explained “in the Word World universe, a 'bee' consists of the word 'bee' shaped like the object that it names; the character 'CAT' is made up of the letters 'C-A-T.'”  The image below shows an ear of corn, a pie, a pot, and a pig. 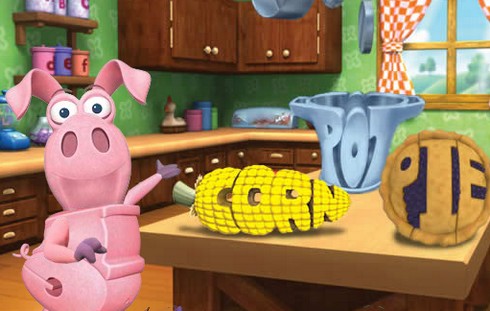 In the lawsuit, Morris alleged both patent and copyright infringement. The district court rejected both allegations on a 12(b)(6) motion-to-dismiss.

On patents, the court held that the word-objects found in Word World could not satisfy “word utterance” limitation of the patent claims.

On copyright, Morris argued that he owned a copyright on the phrase “where words come alive” that Word World uses as its slogan as well as a copyright in the “teaching methodology” that he had developed. The district court rejected both of these arguments: first holding that the phrase “where words come alive” could not be protected by copyright because it is merely a short phrase or slogan; then holding that the “teaching methodology” could not be protected by copyright because copyright does not “extend to any idea, procedure, process, system, [or] method of operation . . . regardless of the form in which it is described, explained, illustrated, or embodied . . . “ 17 U.S.C. § 102(b).

On appeal, the Federal Circuit affirmed without opinion.

The most interesting aspect of the appeal was lead-in by Judge Gajarsa where he warned the lawyers to remain civil:

The court has a few words to say on civility in the courtroom.  I think that it is very very important for attorneys who happen to be officers of the court to conduct themselves in such a manner that at least the record would reflect that they accept each other in the courtroom and outside of the courtroom. A confrontational basis should not exist and should not be part of the record. And, if we read this record, there are a number of issues that could be confrontational and very much out of order with respect to the treatment of the attorneys with each other. You can represent your clients to the best of your abilities . . . . but you don't have to have difficulties among yourselves. I think that it is very very important to maintain civility in our practices.  Especially since lawyers are officers of the court.

52 thoughts on “Sometimes a Pig is Just a Pig”