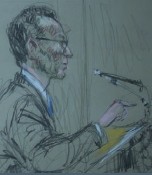 Court of Appeals for the Federal Circuit Judge Daniel Friedman died earlier this week at the age of 95.  Judge Friedman was the last living original member of the court. He was known for his sharp intellect, friendly demeanor, and bow ties.

Judge Friedman graduated from Columbia Law School in 1940 and continued to practice law over the next 71 years (with a brief break to serve in the U.S. Army in WWII).  For the last 29 years, he has been a Judge on the Federal Circuit.   law over a span of more than 70 years — including the last 29 years on the Federal Circuit. In his practice at the Justice Department, then Solicitor Friedman argued eighty cases at the Supreme Court.

Judge Friedman took Senior Status at the Court in 1989 and his seat filled by Judge Alan Lourie. His last patent opinion (of several hundred) was released in January 2011.