The Federal Circuit recently updated its statistics webpage with information for FY 2011 (October 2010-September 2011).  Unfortunately, much of the statistical information that the court previously provided has been removed and is no longer accessible.  Nevertheless, the available data does allow for at least a partial picture of the CAFC's activity.

In terms of overall caseload, one of the court's graphs indicates that it appears to be on the upswing after falling over the past few years: 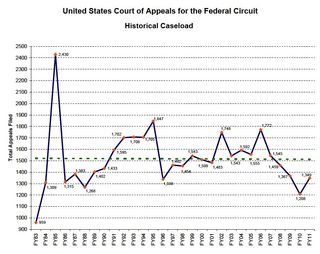 This rise appears to largely be the result of a modest uptick in appeals of both district court and PTO rulings, as well as challenges to CAVC and MSPB determinations, as shown in another CAFC graph: 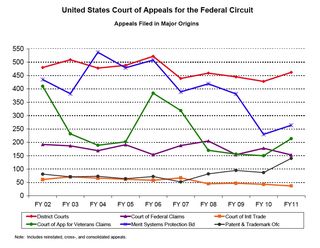 Median time to disposition is holding fairly steady, although there is a slight upswing for appeals arising from the PTO: 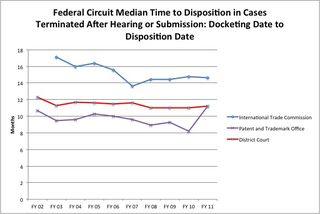 Based on data obtained from http://www.cafc.uscourts.gov/the-court/statistics.html

While this information is unquestionably useful and well appreciated, statistical information that the CAFC previously provided is unfortunately no longer available.  This includes: data about merit and non-merit dispositions in patent suits (see also), affirmance and reversal rates for district court patent infringement appeals (Download 2001-2010 data), charts showing the number of appeals adjudicated by merits panels broken down by category type (IP, admin, and claims), data about merit and non-merit dispositions in all suits, the percentage of appeals terminated in 90 days or less, data showing the number of petitions for rehearing filed and granted (Download 2001-2010 data), and data showing the number of petitions for writ of certiorari filed and granted by the Supreme Court.  Some of this information may be derivable from the court's output, but much of it is difficult to obtain.