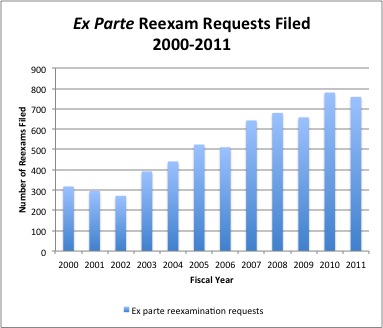 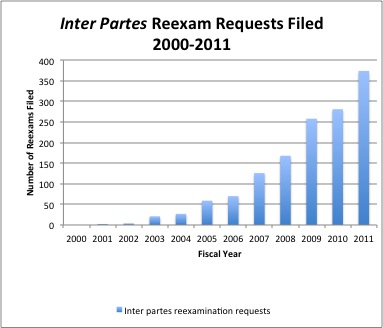 Inter partes reexaminations, in particular, saw a dramatic increase in popularity over the last few years.

The above data may paint an overly rosy picture of reexams, however.  Especially with respect to inter partes reexams, I am dubious that their rapid growth will continue.  One of the AIA's most significant changes to inter partes reexams (inter partes review starting on September 16, 2012) is to raise the standard for successfully initiating a reexam from "a substantial new question of patentability" to "a reasonable likelihood that the requester would prevail."  This change took effect when the AIA was enacted, and may lead to a decrease in the number of inter partes reexam requests filed – or at least, a slowing down of the rapid growth in this area.

The above graphs are corrected from an earlier version.  The original graphs treated the PTO's fiscal year as running from January to December.  It runs from October of the preceding year to September of the identified year.