Over half of the USPTO operational budget is derived from maintenance (or renewal) fees paid by patentees. Fees are due at 3½, 7½, and 11½ years after issuance and each subsequent fee is substantially higher. Thus, under the current schedule, the first fee is $1,130, the second fee is $2,850, and the third fee is $4,730.  For the USPTO, this comes without any costs — all the work of examining is already complete.  The funds are used to subsidize ongoing examination. The USPTO has proposed to increase the maintenance fees substantially in near future as a mechanism of raising further funds for patent operations.

The chart below shows the percentage of patents where maintenance fee payments are made for patents grouped by year of patent issuance.  The vast majority of patentees pay the first fee, but only about 50% pay all three. The 12–year delay in paying fees makes the chart appear to be missing data on the right side. 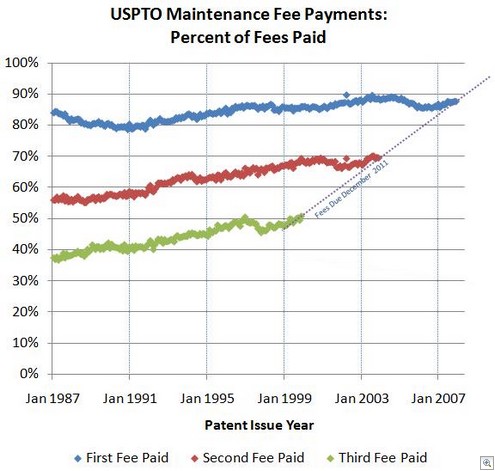 All USPTO fees are subject to market whims and macro-economic effects.  Maintenance fees are a particular problem because a decrease in maintenance fee payments does not lead to any decrease in workload for the Office. In 2009, the USPTO was suffering under a budget shortfall and I noted that the greatest cause of that shortfall was the dropping rate of renewal.

As an aside – it is interesting to note that, even though small entities receive a 50% discount on maintenance fee payments, they are much more likely to abandon their patents and not pay the mantenance fees. [Link]