Patent scope plays a central role in the operation of the patent system, making patent claim construction a critical aspect of nearly every patent litigation.  With the resurgence of patent jury trials in the 1980s, the allocation of responsibility for interpreting patent claims between trial judge and jury emerged as a salient issue.  While the Supreme Court’s Markman decision usefully removed claim construction from the black box of jury deliberations notwithstanding its "mongrel" (mixed fact/law) character, the Federal Circuit’s adherence to the view that claim construction is a pure question of law subject to de novo appellate review produced an unusually high reversal rate. The high rate of reversal distorted the evidentiary foundation of claim construction determinations, delayed settlement of patent cases, ran up litigation costs, and turned appellate review of nearly every patent case into re-litigation of patent claim terms.

In 2004, the Federal Circuit undertook to reassess this regime in the Phillips case.  On its face, the majority en banc opinion largely stayed the course.  Indeed, the studies to have emerged since Phillips suggest that not much has changed, finding that the reversal rate remained high and that the Federal Circuit’s analytical framework remained largely unchanged.

Our recent article reports the results of a longer term, comprehensive, empirical analysis of the Federal Circuit’s claim construction jurisprudence from 2000 through 2011.  See “From de novo Review to Informal Deference: An Historical, Empirical, and Normative Analysis of the Standard of Appellate Review for Patent Claim Construction,” available at http://papers.ssrn.com/sol3/papers.cfm?abstract_id=2150360.  In contrast to prior analyses, we find that the claim construction reversal rate has dropped precipitously since the Phillips decision. 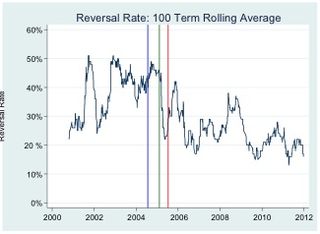 As our article explains, although a majority of the Federal Circuit declined to overturn the de novo standard, just about all members of the Federal Circuit apparently concluded at or around the time of the Phillips argument that they should lighten up on their scrutiny of district court decisions.  The immediate drop in reversals that occurs following the Phillips argument suggests that the change in reversal rates cannot simply be explained by district courts having changed their practices in response to the Phillips decision.  If the real benefit of Phillips was the opinion’s value in instructing district court judges, we would expect to see a delayed and gradual drop in reversals followed by a later increase as litigants began selecting only the strongest cases for appeal.  Instead, we see an immediate and sustained drop in reversals.

As the following chart indicates, affirmance rates for all members of the Federal Circuit rose after Phillips. 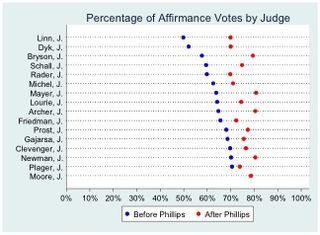 In addition, use of summary affirmances increased significantly following the Phillips decision and has remained higher than the pre-Phillips period. 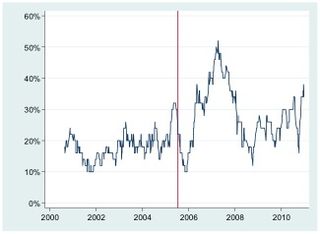 Reversal rates have fallen across all technology fields except business methods. 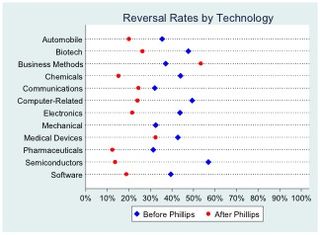 This does not mean, however, that the problems of de novo review have been adequately resolved.  So long as the Federal Circuit subscribes to the view that claim construction is a question of law subject to de novo review, district courts will downplay their resort to experts and fact-finding in managing claim construction in an effort to avoid reversal.  This will undermine the quality of adjudication and appellate review by failing to elicit relevant evidence and perpetuating opaque analysis and reasoning.  We propose a “mongrel” standard of appellate review of claim construction decisions that better reflects the comparative strengths of trial judges in determining how skilled artisans understand patent claim terms.

The proper standard integrates fact-finding based on experts who can illuminate the perspective of skilled artisans and claim draftpersons with careful review of the intrinsic record.  Lower courts’ assessments of such evidence should be upheld if not clearly erroneous or clearly contradicted by the specification or prosecution history.  The Federal Circuit would review the intrinsic record on a more independent basis, but with due regard for the district court’s deliberations, proximity to the full record, and integration of the skilled artisan perspective.  Were the Federal Circuit to embrace such a standard, lower courts would openly exercise their discretion to receive such evidence and build a forthright record supporting their interpretation.  Such a “mongrel” appellate standard would foster better development of the basis for claim construction analysis while promoting earlier settlement of patent litigation and lower litigation cost.  Where the disputed claim term is particularly susceptible to skilled artisan construction, the district court’s ruling would carry great weight.  But where the term is set forth or substantially constrained by the specification or prosecution history, then the intrinsic record would control.  But even in the latter circumstance, we believe that the Federal Circuit should apply a heightened standard – a showing by the appellant of unambiguous evidence in the intrinsic record supporting an alternative construction – so as to promote settlement and reduce litigation costs and uncertainty.

Recognizing this more limited role for appellate review of claim construction should not be viewed as abandoning the effort to improve the clarity of patent claims.  That remains a critical component of improving the efficacy of the patent system.  What our analysis shows is that achieving that goal through de novo review of patent claim construction misapprehends comparative institutional analysis at a heavy cost.  Claim clarity can and should be handled through the claim indefiniteness doctrine and through greater efforts by the Patent Office to ensure that patent claims are clear at the front end of patent protection.

The Supreme Court is currently considering whether to grant a writ of certiorari in a case presenting the standard of appellate review for claim construction decisions in Retractable Technologies, Inc. v. Becton, Dickinson and Co.  We believe that the time is ripe to formalize a “mongrel” standard.

16 thoughts on “Appellate Review of Patent Claim Construction: The Reality and Wisdom of a “Mongrel” Standard”