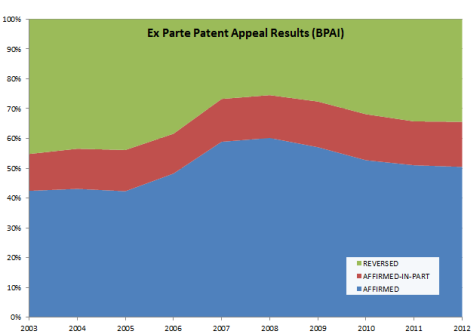 The chart above shows the results of ex parte appeals grouped by the fiscal year of the appeal decision. In the data, I eliminated administrative dismissals and other non-merits actions from consideration. At this point, I don't have a good explanation for the gradual shift in outcomes.  It may be driven by the underlying patentability of the claims; the selection of cases for appeal; shifts in the law; and also changes in Board decisionmaking.  2012 figures presented here are only through July 2012.