This is my second post on the appellate decision that I term Apple II. [Read the First Apple II Post.] In Apple II, the Court of Appeals for the Federal Circuit vacated N.D. California District Court Judge Koh’s preliminary injunction order that would have forced Samsung’s Galaxy Nexus smartphone off the market pending conclusion of the infringement lawsuit. The appellate court provided two independent reasons for vacating the preliminary injunction order: (1) that Apple had failed to provide proof of irreparable harm due to Samsung’s continued use of the particular invention covered by the patent; and (2) that a finding of infringement is unlikely based upon the claim construction as corrected by the Federal Circuit. This post focuses on the claim construction issue.

The patent at issue in this case is U.S. Patent No. 8,086,604. That patent issued in December 2011 but stems from upon an application originally filed in January 2000 and appears to be largely directed to aspects of Apple’s Siri application (although the original invention is not tied to a mobile device). After construing claim 6 of the patent, the district court found that Samsung’s product likely infringes. On appeal, the Federal Circuit has reversed that claim construction in a way that substantially narrows claim scope and thus negates any likelihood that Samsung infringes. Although the claim-at-issue uses open-ended “comprising” language, the appellate panel held that an apparatus that includes additional similar (but non-infringing) elements would not be covered by the patent.

Claim 6 is directed to an “apparatus for locating information in a network” comprising various software elements. The basic idea is that the system has a set of heuristic modules corresponding to different search areas. We all use heuristics for searching. For example, if you want to find prior art relating to a chemical compound, you might hire an expert chemistry searcher. On the other hand, if your search area is airplane seat design, you might hire someone else. Under the language of the patent, these search strategies could be defined as two different heuristic modules each corresponding to their respective search area. In the lawsuit itself, Apple identified the three heuristic modules as (1) a Google Search Module; (2) a Module that allows for Search of Internet Browsing History; and (3) a Search of a user’s Contacts List. One difficulty with considering this case is that this invention appears in hindsight to be ridiculously obvious. However, obviousness is not the topic of the appeal.

The patent claim requires “a plurality of heuristic modules … wherein: each heuristic module corresponds to a respective area of search and employs a different, predetermined heuristic algorithm corresponding to said respective area.” Samsung’s product allegedly uses a plurality of heuristic modules corresponding to different search areas. However, the accused product does not use “different, predetermined heuristic algorithm” for each and every different search area. I have modeled this below with a diagram of the Galaxy Nexus Search System associated with five different Search Areas (A,B,C,D,E) but only three different Heuristic Modules (X,Y,Z). Although some of the Heuristic Modules are re-used by the system, Apple argues that the system still infringes under standard patent law that would find the addition of non-infringing elements to an infringing core does not negate infringement. See CIAS, Inc. v. Alliance Gaming Corp., 504 F.3d 1356, 1360 (Fed. Cir. 2007) (infringing device may include additional, unrecited elements). 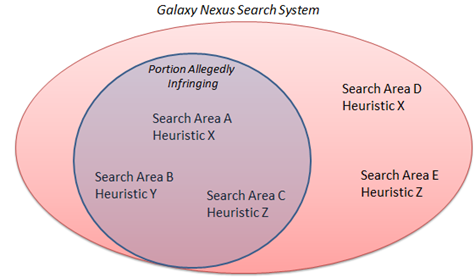 Writing for the unanimous panel, Judge Prost (joined by Judge Moore and Reyna) rejected Apple’s argument and instead agreed with Samsung that the claim “requires that [each and] every heuristic module within the accused device use a unique heuristic algorithm.”

[D]espite the use of “comprising,” claim 6 is not amenable to the addition of other modules that do not use different heuristic algorithms because such addition would impermissibly wipe out the express limitation that requires every module to have a unique heuristic algorithm.

It appears from the court’s remarks that a simple claim amendment might have saved Apple’s case:

However, Apple might not have been able to obtain patent protection if it had clarified that the system might use the same heuristic algorithm for a variety of search areas. In particular, during prosecution Apple used the limitation in question to avoid prior art. The company argued “Andreoli does not describe … that each of the local and remote search operations employs a different heuristic algorithm.” Although the appellate panel based its decision on what I see as odd linguistics, this prosecution history argument is probably the most damning evidence.

Apple has at least one continuation application pending and thus has the opportunity to further shape its claims in a way that captures the market while avoiding prior art. See U.S. Patent Application Pub. No. 2012-0166477. The USPTO is also in the early stages of conducting an inter partes reexamination that was filed in August 2012 by Motorola Mobility (Google). See Inter Partes Reexamination No. 95/000,685.