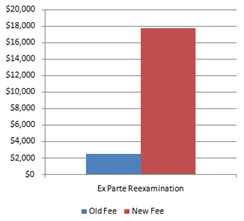 In the days leading up to September 16, 2012 there was a rush to file these ex parte reexamination requests in order to beat the fee deadline. The 200 or so requests filed in the final week is equivalent to about four months of filing in more ordinary weeks. With that in mind, it is not surprising that the post-September-16 filings are at a much lower rate – about one third of the pre-implementation rate for the past seven weeks.

By new year (January 2013), any gap created by the rush to file should be dissipated. However, I don’t expect for the ex parte reexamination filings to be back to their normal pre-AIA rate because of the new high-cost of filing ex parte reexaminations and because supplemental examination is now a better alternative for the majority would-be owner-filed reexaminations. The one caveat is that the new increased expense of inter partes review may push some challengers toward the ex parte approach.