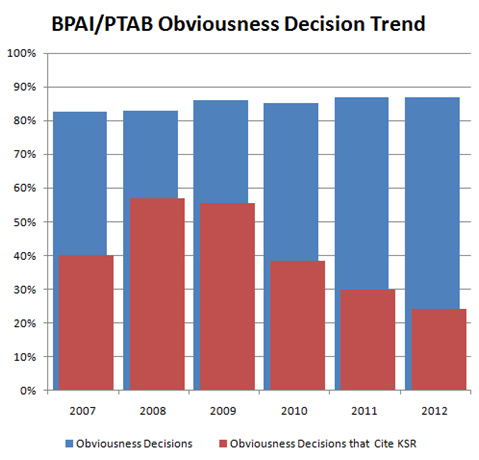 The vast majority of BPAI/PTAB decisions focus on the question of obviousness. Basically, the Board is reviewing whether or not an examiner's obviousness rejection is proper. I created the chart above by using a simple text search for obviousness related terms within each BPAI/PTAB merits decision during the past six years and found that roughly 80-85% of Board decisions discuss obviousness to some degree. I previously tested this methodology against an actual reading of cases and found that my automated methodology correlates quite well. The results for the percentage of obviousness decisions are in blue. A subset of those cases are found in red and represent the percentage of Board merits decisions that cite to the Supreme Court's decision in KSR Int'l Co. v. Teleflex, Inc., 550 U.S. 398 (2007). That decision was important because it changed the law of obviousness as applied by the USPTO.

Apparent from the chart is the fact that the BPAI/PTAB is citing KSR much less frequently in 2012 than it did in 2008-2009. My hypothesis is that a smaller percentage of applicants are fighting about the law of obviousness and more are now focused on application of that law. Mixed into this is the reality that the Board is also writing shorter opinions — leaving less room for pesky citations. 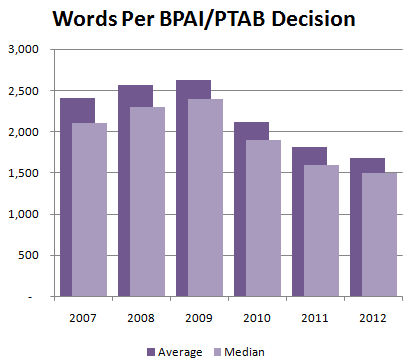