So it really was no surprise when the Federal Circuit agreed to take CLS en banc. We, along with many others, hope that this case would provide the Court an opportunity to head the Bilski Court’s warning that:

The Information Age empowers people with new capacities to perform statistical analyses and mathematical calculations with a speed and sophistication that enable the design of protocols for more efficient performance of a vast number of business tasks. If a high enough bar is not set when considering patent applications of this sort, patent examiners and courts could be flooded with claims that would put a chill on creative endeavor and dynamic change. (130 S. Ct. at 3229).

As currently interpreted, § 101 leaves parties unable to discern a patent’s metes and bounds or assess its validity, making inadvertent infringement an unfortunate cost of doing business. This has led to a dangerous and dramatic increase in patent litigation, particularly surrounding business method patents or those covering software. For better or worse (and I think worse), the major uptick in these cases involved non-practicing entities. Some data that we included in our amicus brief filed in CLS Bank: 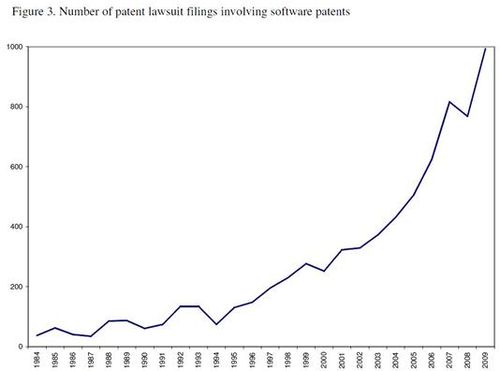 These statistics are a direct result of the legal instability surrounding § 101. One way to stem this problem is to create incentives for those facing litigation (or litigation threats) to pursue their meritorious defenses of noninfringement and invalidity. Section 101 could play that role, in fact, the Mayo Court seemed to state as much: “to shift the patent-eligibility inquiry entirely to these late sections [§§102, 103, 112] risks creating significantly greater legal uncertainty, while assuming that those sections can do work that they are not equipped to do.” 132 S. Ct. at 1304.

Yet no version of recent § 101 jurisprudence offers much hope of settling the law. Instead, we recommended in our brief (filed along with Public Knowledge) that the Federal Circuit take another route and adopt a stricter construction of § 112(f), as recently proposed by Prof. Mark Lemley. Specifically, instead of attempting to figure out whether a broad, functional claim is abstract or not, a court may first use § 112(f) to narrow the claim to the structures and their equivalents recited in the patent and then, if questions remain, make a § 101 inquiry.

While § 112(f) has traditionally been applied to apparatus claims, it’s clear that Congress intended it to apply to method claims as well. Despite this, software patents often do not detail actual algorithms or explain how to actually carry out the methods they attempt to claim; as such they should be indefinite under cases like Aristocrat Techs. v. Int’l Game Tech. If the claims do specify the algorithms, then the § 101 inquiry will be limited to those algorithms and their equivalents. These questions—of whether §112(f) applies; if it does, how the claims should be limited; and then if § 101 permits that narrowed claim—could all be accomplished at early stages of litigation, before expensive discovery and motion practice.