Since 2005, the average number of claims in issued patents has fallen rather steadily. The drop is most particularly apparent in patents that include more than 20 claims. The chart below shows the percent of issued patents with more than 20-claims charted as a 20-week moving average by issue date. One trigger for this change was a December 2004 change in the application fee structure that roughly tripled the cost for filing each claim more than the original 20. With that cost-structure, it became cheaper to file a second patent application rather than one application with 40 claims. There are other hypotheses for the shift, such as the commodification of the 20-claim application, downturn in the economy that limited both cash-on-hand (for some companies) and the expected value of issued patents, changes in the value of patent claims, etc. Foreign applicants generally file fewer claims on average than those contained in US originated applications. However, both groups have experienced a relatively similar drop. 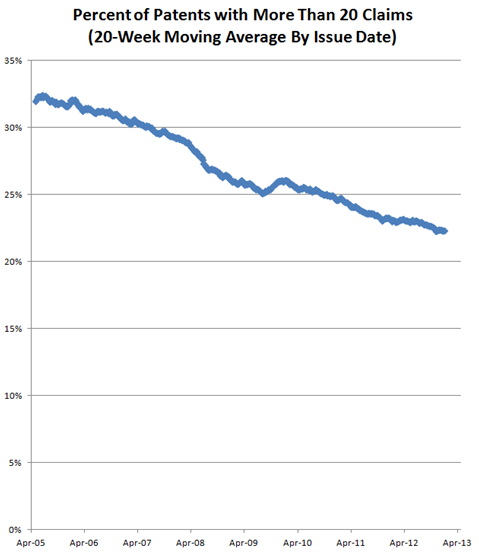