Stuart Graham (USPTO’s Chief Economist) and Saurabh Vishnubhakat recently published an interesting short paper entitled Of Smart Phone Wars and Software Patents. The paper largely defends the USPTO’s examination of software patenting by showing that its approach in the software arts is essentially the same as in other fields.

The two charts below come from the article. The first shows the percentage of first office actions that are first-action allowances. This is calculated for each fiscal year as the (# of first action allowances) / (# of first actions). The second chart looks at the first “final” action in a case. For their study, a final action is either (1) a final rejection or (2) an allowance. And, the first final is whichever one of those came first.

The point of the article was to show that software patents have been treated approximately the same as other patent applications. That is an important take-away. However, what is amazing to me is the dramatic change in practice that we have seen over the past few years. 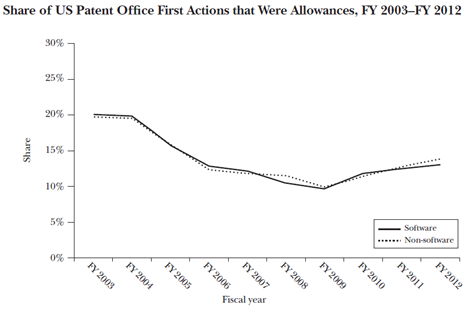 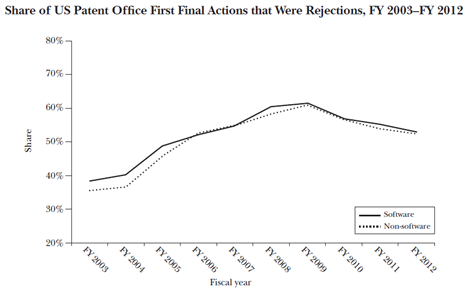 41 thoughts on “Of Smart Phone Wars and Software Patents”