In his list of the 10-most-overpaid-jobs, Money Magazine’s Rick Newman includes the following:

Patent attorney ($170,000). We tend to think of patents as the breakthrough insights of revolutionary inventors, but they’re increasingly a form of warfare among corporations seeking to prevent each other from gaining a technology edge. The lawyers who fight those battles are among the highest-paid professionals PayScale surveys.

Oddly, Newman’s reported average of salary of $170k is well above that actually reported by his cited PayScale results. 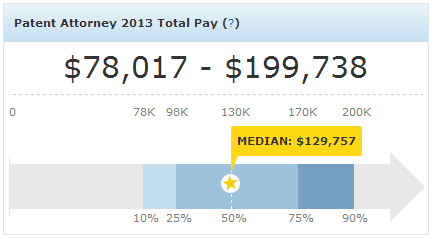 384 thoughts on “Are Patent Attorneys Overpaid?”