As the America Invents Act slowly fades as a cocktail party topic, your conversation might gravitate to your upcoming summer vacation at the beach. Don’t worry, this conversation will present opportunities for patent-spirited discussions as well.

Last month, while preparing a presentation on U.S. IP law for a class of fashion design and communications students in Milan, Italy, I came across a patent that changed my perspective on a summer beach vacation. U.S. patent 8,371,043, applied for on August 1, 2008 (two provisional applications were filed earlier), and issued on February 12, 2013, concerns “a molded shoe featuring a 3 dimensional figure (e.g., an animal or character)” that is perfect footwear for any child’s day of fun at the beach.

I wanted to include a utility patent in a series of examples of how individual types of IP rights under U.S. law, which is often presented as deficient in its limited protection of fashion, might provide some protection to some aspects of fashion. However, this particular utility patent was not a good introduction to U.S. patent law for the students – it certainly was not suitable to explain the “law on the books,” although it was appropriate to illustrate the “law in action.” By the point in the semester when I spoke to the class, the students had a pretty good idea of IP law as it exists in European countries, and they seemed to be eager to learn about U.S. IP law. They took copious notes when I talked about section 101 and the conditions for patentability under U.S. law. But when I showed the slide with the molded shoe patent the pens went down and the eyebrows went up.

It was telling that the students, on seeing the drawings of the invention, almost uniformly exclaimed: “Crocs!” Indeed, to an average consumer the shoe in the drawings might resemble Crocs, which have been on the market since about 2002, and it might surprise the public that the assignee of the patent is not Crocs, Inc., but Polliwalks, Inc. The idea of putting the face of an animal or a character on the tip of a shoe and a corresponding surface print on the bottom of the shoe might have been non-obvious to a PHOSITA but did not seem non-obvious to the students, who knew of various fabric shoes featuring animals and characters – shoes that very likely had preceded the invention in the patent. Nor did having a sole that makes an imprint corresponding to the shape of the sole impress the students as non-obvious. In the end the class agreed that issues of patentability are complex and that the students were not likely to be in a position to second-guess a complicated assessment of non-obviousness.

What was perhaps more troublesome about the patent, though, was that it extends to “[a] method of making an animal imprint on a surface with a molded shoe” (Claim 11). If you have any doubts about the link to a day at the beach you should know that the surface in the patent is identified as “a soft surface that includes dirt, mud, sand or clay” (Claim 12). With the exception of sale representatives and designers of competitor-infringers who might engage in making imprints with patent infringing products, the only other people likely to infringe the method claims appear to be consumers using patent infringing products – children who, as the patent applicant assures us, “enjoy exploring and learning about new things” (as written in the Background of the Invention). Apparently, these “things” will now include patent infringement.

The Milan students wondered about the utility of patenting a method that is likely to be infringed primarily – if not only – by consumers. Does the patent owner really plan to sue consumers for patent infringement when consumers walk on U.S. beaches? Is that an ideal public relations strategy? Are the method claims really just hooks for potential indirect infringement claims? Or did the applicant simply apply for whatever protection that was available?

U.S. patent 8,371,043 was certainly issued in time to be a conversation topic before the upcoming summer at the beach. It provides excellent material for a discussion of U.S. IP protection for fashion and the value of U.S. patents. It also allows you to revive the America Invents Act as cocktail party conversation and point out that the AIA, while making some revolutionary changes to U.S. patent law, certainly does not solve all of the issues of the U.S. patent system. 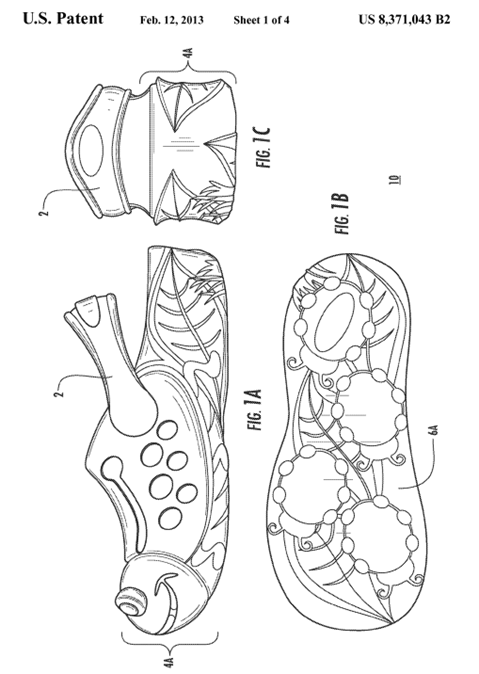