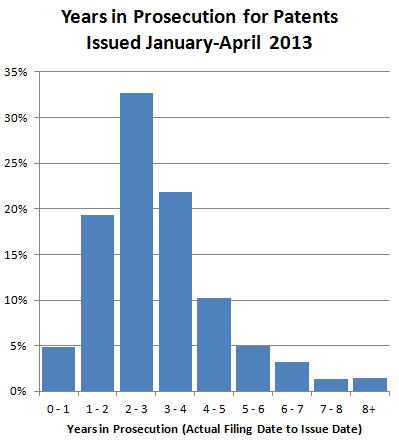 You can get this from the chart, but the median pendency is under three years when considering all issued utility patents. The long tail increases the average pendency to a bit over three years.

Many of the fastest patent issuances are coming from the Patent Prosecution Highway (PPH). See, for example, U.S. Patent No. 8,406,758. In that case, the EPO issued its search report indicating that all of the claims included an inventive step. US patent attorney Stephen Chen then filed the US national stage application along with a request to participate in the PCT-PPH program. Four months later, the considered the application and issued a notice of allowance.

6 thoughts on “Patent Pendency and the PPH”