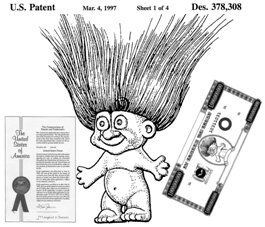 Last month I moderated a panel discussion hosted by the Information Society Project at Yale Law School on what are variously (and ambiguously) called patent-assertion entities (PAEs), non-practicing entities (NPEs), or patent trolls (video here). These entities have attracted significant recent attention: they are the target of a GAO report required by the AIA (now nearly eight months overdue), a DOJ/FTC workshop (which may lead to subpoenas), and the proposed SHIELD Act (mandating fee-shifting for some losing NPEs). But several panelists at Yale argued that this focus on trolls is misplaced.

Professor Michael Risch (Villanova), described his finding in Patent Troll Myths that the patents enforced by trolls look “basically like the patents you see in the rest of the world.” NPEs drive up product costs by suing operating companies over what are sometimes weak patents—but so do operating companies, and if this a problem, any solution should target both. He said his views are nicely illustrated by the case of Innovatio targeting thousands of Wi-Fi end users:

My first thought upon hearing about these folks was “the gall of these people, to think that they invented wireless LANs.” [But] it turns out they got all their patents from Broadcom. You know what? Broadcom did invent wireless LANs, along with a bunch of other people … It’s unclear whether [Innovatio is] doing bad things by going after these end users, I don’t know. But the question I have is, would it be so much better if Broadcom were doing this? I don’t think so. … A lot of [NPE] patents come from people who have spent money developing them, real research dollars, which is the exact kind of thing we have patents for. … We have to do something about the behavior, and not the owner.

Christina Mulligan (Yale ISP Fellow, starting as a professor this fall at Georgia Law) countered that extreme trolling behavior—in which the patent is simply hidden “in a submarine-like way” until an operating company independently invents and commercializes—is necessarily harmful because society gains nothing from the patent. This problem could be alleviated with an independent invention defense, or with solutions more directly targeting trolls (including private solutions such as Colleen Chien’s proposed patent litigation insurance for small companies, which Mulligan thinks might “starve the [troll] beast”). Professor Tun-Jen Chiang (George Mason) agreed that trolls often assert normatively unjustified patents, and noted that the same problem can exist when an operating company holds the patent. The problem of legally valid but negative-net-welfare patents is not an NPE problem—it is a systemic problem. NPEs simply make enforcement of such patents more effective, but “if we are going to a bad destination I don’t want to get there faster.” And even though the problem is broader than NPEs, in the absence of real patent reform, a narrower solution that targets NPEs might be “a second-best solution.”

Manny Schecter (IBM Chief Patent Counsel) disagreed, arguing that reforms that target particular business strategies (or particular technologies) are a mistake. But that doesn’t mean that NPEs are not causing an enormous shift in the patent landscape. IBM has been the top annual US patentee for the past 20 years and licenses its IP “to the tune of a billion dollars a year,” but it has only brought litigation to enforce its patents “once or twice a decade.” NPEs are now driving a “dramatic increase” in the amount of patent litigation (most of which does not affect IBM because it is no longer in the consumer electronics space). This isn’t necessarily bad, but it is definitely changing the dynamic—because legal departments are “overwhelmed,” NPEs “can impede the ability of the genuine competitors from enforcing their patents.” Still, an independent invention defense like Mulligan suggests would be a “mistake” because it would create an incentive to not look at patents and to reinvent the wheel. “Some of the academics here will say, ‘Well, studies show people don’t look at patents to figure out what others are doing.’ … Don’t believe it.” [Note from Lisa: I agree!] Instead of focusing on NPEs, “to the extent we can do anything to improve the patent system’s certainty and clarity, we should be doing that … Removing some of those uncertainties from the system will in turn take away a tool that is in fact sometimes leveraged in the very types of litigation we are talking about here.”

Nathan Kelley (PTO Deputy Solicitor) described two such PTO initiatives to improve the patent system’s clarity: First, improving ownership information in PTO databases from the current “antiquated system of recording” so that people know who owns patents throughout their lifecycle and “who is the controlling entity behind accusations of infringement.” Second, working during prosecution to make sure claims have “understandable scope,” which is “particularly problematic when it comes to functional claiming … a problem that arises more frequently—I think it’s fair to say—in the NPE world and the software world.” He specifically mentioned Mark Lemley’s work on how § 112(f) needs to be applied more rigorously, and said they are working on having examiners specify on the record whether they think claims trigger § 112(f) or not. But he agreed that specifically targeting NPEs is a mistake:

We have history in our country of making our patent laws technology neutral, and maybe even business-model neutral as well. And to extent that we want to step away from that, and start to make laws that discriminate either on technology or on the business entity asserting the rights, we’re going to cause some problems, and we’re going to some extent devalue patents that already are there. … If we tip the balance against patentees, inevitably we are going to lower the incentive factor. And whether that’s a good thing or not I guess is something we’ll continue to debate.

The debate about patent trolls thus really seems to be a debate about the patent system. None of the panelists seemed to believe that patent assertion by NPEs is per se a problem—if there is a problem, it is that normatively unjustified patents are disproportionately asserted by trolls (though trolls also assert “good” patents, and “bad” patents do not exclusively belong to trolls). How you feel about trolls will depend on how prevalent you think those “bad” patents are—where “bad” means that the patent has negative net social welfare, even though it might be completely legally valid—a question that is frustratingly hard to resolve empirically. In the meantime, the best we might be able to do is improve patent clarity and certainty, a goal that is hard to argue against (though some have tried). Unfortunately, given current divisions on the Federal Circuit, improving clarity is sometimes easier said than done.